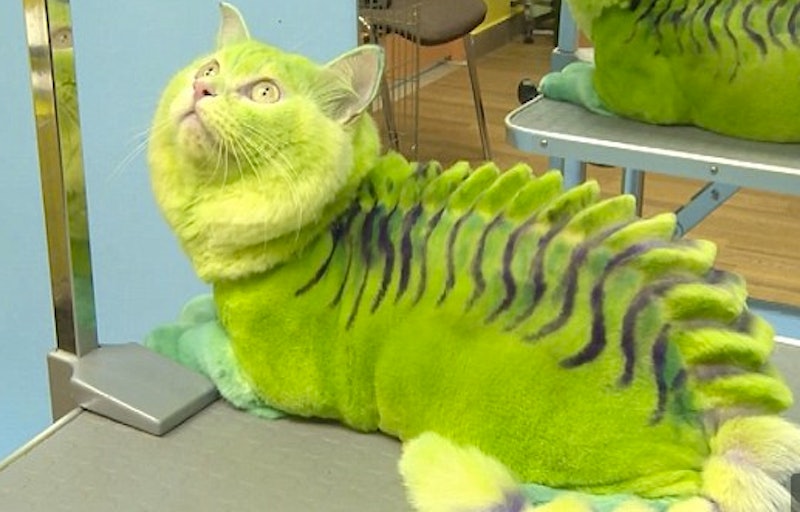 When I woke up this morning, I rolled over, looked at my aged persian cat named Rumi and said, "You know what? Today's the day. I am going to fly you to Russia and have you shaved and dip-dyed to resemble a pegasus." Only that didn't happen. Because I am not spontaneous, currently in possession of a passport, nor do I think my cat would suffer the indignity of being groomed to resemble an mythical horse-beast. I think he'd quietly and with great ceremony hurl himself from the airplane rather than meet such a fate.

That is not the case for dogs and cats in Russia, where one salon is all, "Your dog wants to be a bumblebee and clearly that cat has the heart of a dragon SO WE WILL MAKE HIM ALSO A DRAGON EXTERNALLY." (Side note: If I ever audition for SNL, I will apparently be doing an impression of a slightly unhinged Russian pet groomer.) I'm of two minds about this. The first: This is hilarious, how much does it cost, and also can I take classes and maybe do this at home to my own pets? The second mind (#thebeccawithtwobrains) can't help but be all, PETA is gonna be ON these guys and they totally deserve it.

The shop's owner, Daria Gotz, clearly has a passion for these extreme looks. But does that translate to a passion for keeping your animals, you know, alive as well as internet-celebrity ready? Gotz won't explicitly speak as to the chemicals used other than saying vague things about them being "botanicals", but insists that the animals are in no danger. I don't know dude, animals are sensitive and if you're dip-dying my cat and telling me the color won't wash out, I am going to remain skeptical re: toxins.

Safety aside (and that's a BIG thing to put aside) It's hard to say how the animals feel about it either. I mean, for one thing, a dog cannot be trusted: If you speak in a nice voice to them and rub their adorable bellies their joy will be so great that spontaneous combustion can become a real concern. Plus, cats are just generally as a rule perpetually enraged about something, so whether or not they loathe being transformed into a ren-faire ready companion or not is up to interpretation theoretically. Unless you are pet psychic. If you are a pet psychic: PLEASE BE MY FRIEND.

I get the idea of wanting you animal to look hilarious. Last year for Halloween, I bought Rumi a bandana with a blond wig sewed in and made him be Brett Michaels. Sometimes for laughs I put t-shirts on my roommate's giant dog (I don't get out much). But even after a Rumi's successful Halloween, he hid under the bed for roughly a twenty-four hour period so great was his ire. I cannot imagine his psyche handling it if I took him to a groomer and was all, "MAKE HIM LOOK LIKE A POWERFUL CENTAUR." *excuses herself to google DIY cat centaur costumes*