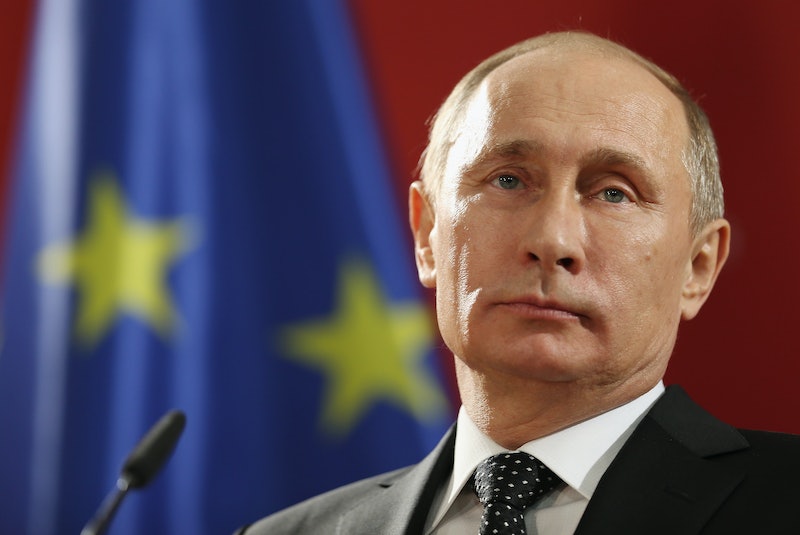 Earlier this month, it was reported that Russian President Vladimir Putin said in a private phone call that he could "take" the Ukrainian capital of Kiev if he wanted to. But the brash Kremlin may have set some new goals. According to the German newspaper Süddeustche Zeitung, Putin threatened to invade Poland, Romania and the Baltic states in a separate phone call with Ukrainian President Petro Poroshenko.

According to The Telegraph, the Kremlin allegedly made those comments to Poroshenko in a series of phone calls discussing the Ukraine-Russia ceasefire, which is still holding since being instated on Sept. 5. The exact dates of these phone calls are still unclear. However, Süddeustche Zeitung reported that a memo from a meeting last week between Poroshenko and European Commission President Jose Manuel Barroso described Putin's threats.

Putin allegedly warned Poroshenko that he wouldn't stop with the Ukraine, but take Russia's military to other former Eastern Bloc countries, including Poland:

If I wanted, in two days I could have Russian troops not only in Kiev, but also in Riga [Latvia], Vilnius [Lithuania], Tallinn [Estonia], Warsaw [Poland] and Bucharest [Romania].

If these alleged comments are true, then this marks the first time Putin has threatened direct military intervention against members of the European Union and NATO. Ukraine is not a member of either coalition, though the Ukrainian government is actively working toward admittance into the EU.

On Tuesday, the government ratified the Ukraine-European Union Association Agreement, which will strengthens Ukraine's ties to the EU. It's the same document that triggered the Ukrainian Revolution in February after then-President Viktor Yanukovych refused to sign it.

If Putin were to send his troops across the borders of Poland, Romania or the Baltic states, it would be a potentially disastrous move for Russia: All of the countries Putin reportedly mentioned are members of NATO, which means NATO would be compelled to act with force. Touching any one of those Eastern European countries would most likely trigger a way between Russia and Western Europe.Although it seems unlikely that Putin would want to kick off World War III, it's not like many Eastern European countries have much faith in the Kremlin, either. Since the Ukrainian Revolution and ensuing Crimean crisis began, leaders from Poland and the Baltic States expressed their concerns over Russia and the safety of their countries. In early September, a group of Polish thought leaders appealed for help from the rest of Europe, warning that the current crisis could result in another war:

West Europeans should never again espouse such selfish and short-sighted policy towards an aggressor. Sadly, current developments and the sudden rise in tension in Ukraine are reminiscent of the situation that existed in 1939. An aggressive state – Russia – takes over Crimea, a part of its smaller neighbor’s territory. President Putin’s army and special services operate in eastern Ukraine, often covertly, supporting separatist formations that terrorize the local population and openly threatening invasion.

More like this
How To Follow The New Royal Family Social Media Accounts
By Sam Ramsden
Here's Who's *Really* In Charge Of The Royal Family
By Savannah Walsh and Meguire Hennes
Meet The Rugby World Cup Breakout Star Making The Sport More Inclusive
By Shahed Ezaydi
Kate Middleton & Prince William Were Booed & Mocked On Their U.S. Visit
By Jake Viswanath
Get Even More From Bustle — Sign Up For The Newsletter