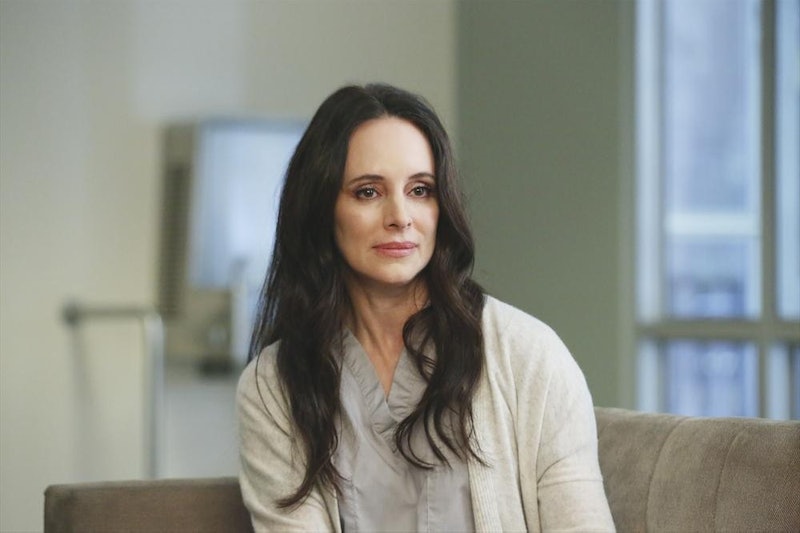 Where does one begin when compiling a recap of Revenge Season 3? Pretty much everything in the Hamptons is bloody, intense, and completely bananas at the start of Season 4 thanks to Season 3's crazy twists and turns. And it looks like we'll be seeing the start of a Victoria Grayson revengenda in Season 4 rather than focusing all of our attention on Emily Thorne's cunning plans. But what happened in Season 3 that would cause Victoria to believe Emily Thorne needs to be punished? Oh, so many things...

For those of you who were overwhelmed by the amount of shocking moments Revenge gave us in Season 3, I don't blame you. It was the definition of insanity. The season began with Nolan freed from jail, but still being considered a dark mark on the Hamptons. Jack was dealing with Emily's revelation that she was actually Amanda Clarke. And it was not going well at first. Emily and Aiden were still together and still secretly going through with their plans to take down the Grayson's now that Emily's resolve for the plan had strengthened once again thanks to that bomb blast for which Nolan was arrested. However, Emily and Daniel's engagement and plans to get married very soon remained intact.

Victoria's long lost son Patrick came back into the picture though Victoria took a little while to introduce Patrick to the whole family. After settling in, Patrick eventually embarked on a relationship with Nolan that Nolan later ended thanks to Patrick betraying him when he found Emily's infinity box and stole it for Victoria. Thankfully, Nolan switched out the David Clarke secrets before Patrick took it. Patrick also discovered he was the child of rape and accidentally gravely injured his father Jimmy while trying to defend Victoria. But before Patrick could call the ambulance for Jimmy's head trauma, Victoria stopped him and let Jimmy, presumably, die.

Daniel Channels His Evil Grayson Side

Meanwhile, before Emily and Daniel's marriage, Daniel reconnected with his ex-girlfriend Sara so Emily claimed she was pregnant so the wedding plans would continue. However Daniel discovered Emily faked pregnancy and that Sara tried to commit suicide. In an angry, drunken stupor, Daniel shot Emily on the yacht after their wedding. When Emily recovered, she covered for Daniel and said Lydia Davis shot her. Later Emily discovered she could no longer have children thanks to her injuries. Daniel took up with his Sara once again but the relationship ended quickly. He asked Emily for a divorce and began working with Margeaux LeMarchal in the American version of Voulez Magazine.

The Introduction And Death Of Victoria's Love

And Margeaux just happens to be the daughter of French mogul Pascal LeMarchal. She began dating Jack for a while, but the two later break up. And in a shocking twist, Pascal became Victoria's lover and later fiancee.

Naturally, Emily tried to turn Pascal against the Graysons, but it nothing worked until Aiden kidnapped him and she pretended to be a Homeland Security agent who forced Pascal to wear a wire and get Conrad to confess his crimes.

Later, Pascal announced his daughter as his successor at a a new app launch party, Conrad took Pascal to the roof and pushed him into a spinning helicopter propellor. Emily saw the murder, but got there too late to stop Conrad. Conrad bribed the helicopter pilot to corroborate his story that Pascal's death was an accident.

Aiden's Time In The Hamptons Ends

Victoria slowly but surely learned that Emily was not who she says she was. By the end of the season, she discovered that Emily was in fact Amanda Clarke and she has been the one ruining Victoria's life for many years now. She also believed Emily murdered Pascal, so she lured Aiden into a trap and killed him to punish Emily.

But as we all know, Emily got the last laugh as she dug up Amanda's grave, knocked Victoria out with a shovel, and admitted her to a psych ward by claiming Victoria was so obsessed with Emily's identity that Victoria dug up Amanda Clarke's grave. Victoria ended the season screaming that Emily was the real Amanda but no one would listen.

In the midst of all of this, Charlotte received letters that may have been written by her dead father David Clarke. After giving up on the search, Emily and Aiden fake abduct her in order to force a confession out of Conrad and Victoria about the downing of Flight 197. Emily showed Conrad fake footage of Charlotte being tortured and a fake ear which forced Conrad to hold a press conference admitting to his and Victoria's involvement — albeit with the added excuse that they acted under duress.

Charlotte turned up alive and unharmed, but confronted her father about his guilt. He retaliated by confessing many of his crimes, but what he didn't know was that Charlotte's jacket was wired to broadcast their conversation to the world. After his arrest and imprisonment, Conrad somehow bribed a corrupt guard to let him escape. As he walked down a dark road, David-freaking-Clarke (suddenly alive and well, mind you) stopped Conrad and stabbed him, leaving him for dead.

So, there are quite a bit of puzzles to solve as we head into Season 4.