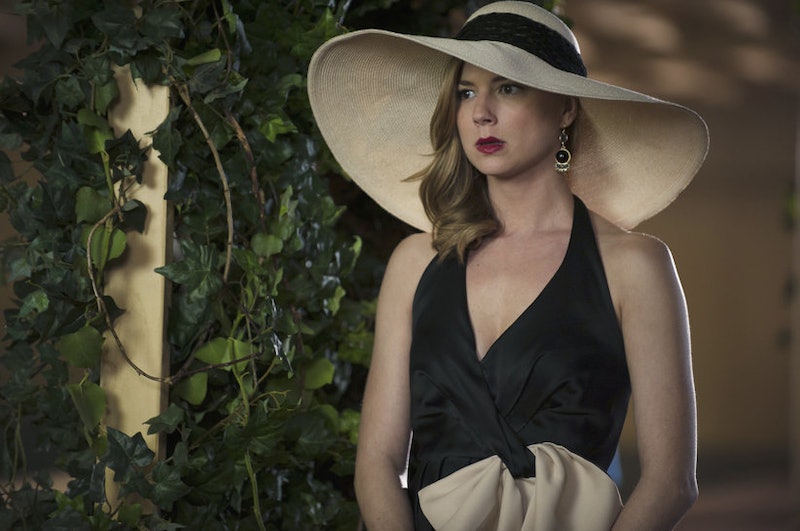 Summer may almost be over, but our adventures in the Hamptons have only just begun. On Sunday, Sept. 28, Revenge returns for Season 4 to deliver a brand new batch of lies, secrets, and revengendas. Sounds pretty exciting, right? I promise you (x double infinity) that is it. However, there are still a few stragglers out there who have yet to fully complete, or even start for that matter, watching Revenge Season 3. Clearly, this will not do. So if you have any hope of trying to catch up by the time Season 4 starts, you’re going to have to think like Nolan and trust in the infinite powers of the world wide web.

That’s right, folks — like with many things in life nowadays, your problem can easily be resolved by looking it up online. All it takes are a few easy clicks of your mouse and BAM, you’re back to living your own double life as a diehard binge-watcher. (Emily Thorne would be so proud, BTW.) All you need is for someone to point you in the right direction. That’s where I come in. Simply check out your options below, grab a bowl full of popcorn, and let the Hamptonite madness commence! After all, revenge is dish best served online.

Do you or someone you know have access to a Netflix account? If so, you’ll be able to stream the entire season right from there. It’s that easy! Heck, if you're feeling daring, you'd probably even have time to go back and watch some of your favorite episodes from Seasons 1 and 2. The world is your online oyster.

Spend Hours Scheming on Hulu Plus

Unlike some other shows that only get the last five or six episodes of the season posted, Hulu Plus has the entire third season of Revenge up for your viewing pleasure. Clearly, even the streaming service knows not to mess Emily Thorne’s fans.

Trace It Back To Its Roots

It’s a slightly different story when it comes to the show’s own network site. In an odd change-up, ABC.Go has made episodes 10 and 11 available as well as episodes 21 and 22 (aka the finale). Why, you may ask, did they chose to post only these random few episodes? In this scenario, your guess is as good as mine. Go home, ABC. You’re drunk.

Front the Money Yourself

Of course, there’s always the option of pulling a Grayson and flat-out paying the problem off. Luckily for you, the entire third season can be found on iTunes, Amazon, and Vudu. So whether you’re in the market to buy the whole season or just a few missed episodes, the road to your salvation lies within your wallet.

Hire Nolan to Hack the System

I mean, the guy is a technological genius. I’m sure he’d be able to use his powers of the interwebs to track down an online copy of Season 3 for you. Just tell him Emily Thorne sent you.