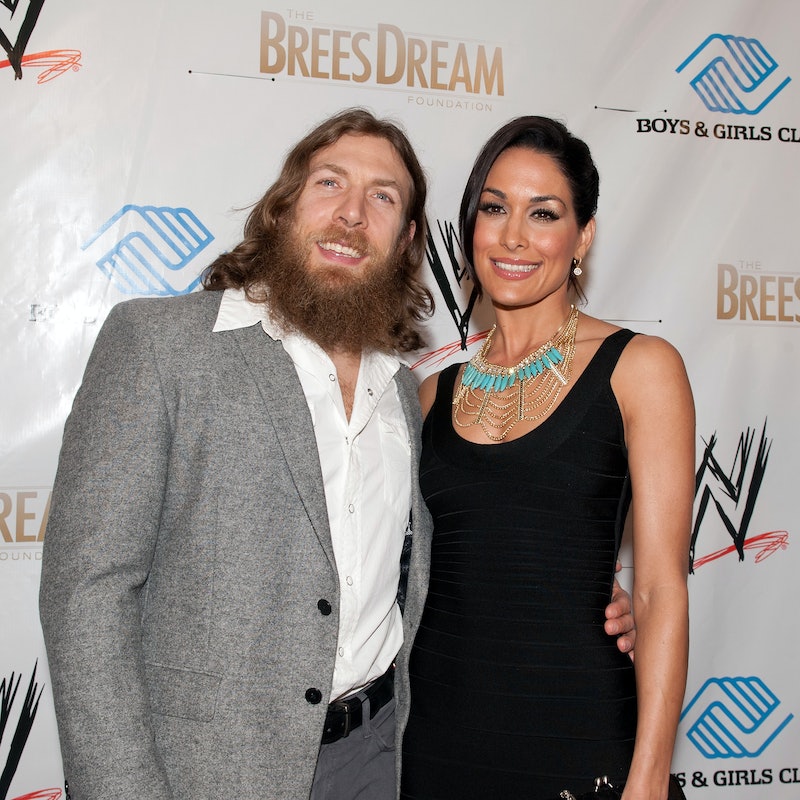 Oh, professional wrestling entertainment. Between your costumes pulled from the "sexy" section of a Halloween store to over-the-top dialogue and delivery that could put the cheesiest telenovela to shame, it's a bit hard to swallow that the reality show devoted to the industry's women, E!'s Total Divas, might not just be a tightly scripted endeavor. For example, were Brie Bella and Daniel Bryan's jobs ever really in danger? While it claims to be a reality series, fans of both Total Divas and WWE might have noticed some overlap in plot lines.

For instance, Wrestling Rumors claims that the show has proven to have some overlap in creating storylines that bleed over from the scripted WWE to the not-so-unscripted Total Divas, though the latter does include some real life events, like Brie and Daniel's wedding. Fans have even taken to reddit to point out plot holes and inconsistencies with many of the reality programs episodes on the site's wrestling subreddit calling it "reality kayfabe" (kayfabe in pro wrestling is a term used to describe the staged nature of the industry, meaning it's not so much "fake" as it is a deliberate fabrication for entertainment purposes). While WWE programming is a guilty pleasure, accusations of fakery are a bit irrelevant, considering it’s still entertainment carried out by very talented stunt people.

So it sort of goes without saying that while Daniel Bryan really did have to undergo that neck surgery, he probably didn't need to come to work in a neck brace as seen in the clip above and have a public spat with his boss about his wife getting fired and his title being in danger. So what happened? Bleacher Report has the whole lowdown, but basically Brie felt that Stephanie McMahon, their boss, was mistreating hubby Daniel Bryan, and "quit" the WWE, but not before slapping her in the face. When Brie returned as spectator to support twin sister Nikki in a match, McMahon appeared ringside to slap her back and was later "arrested" on camera, for some juicy live soap opera action. Honestly, it seems like if you're not watching pro wrestling, you're missing some salacious good reality fun.

So how real is all of that? Considering the first Google search drop down suggestion when searching for the two women is "brie bella stephanie mcmahon storyline" and the above Bleacher Report piece also refers to it as such, we can go ahead and assume that everyone is in on the kayfabe secret and it really is just a testament to the WWE's ability to craft plotlines to rival some of our favorite reality shows. What the world really needs is for someone to create a supercut of just the story scenes of this whole affair.