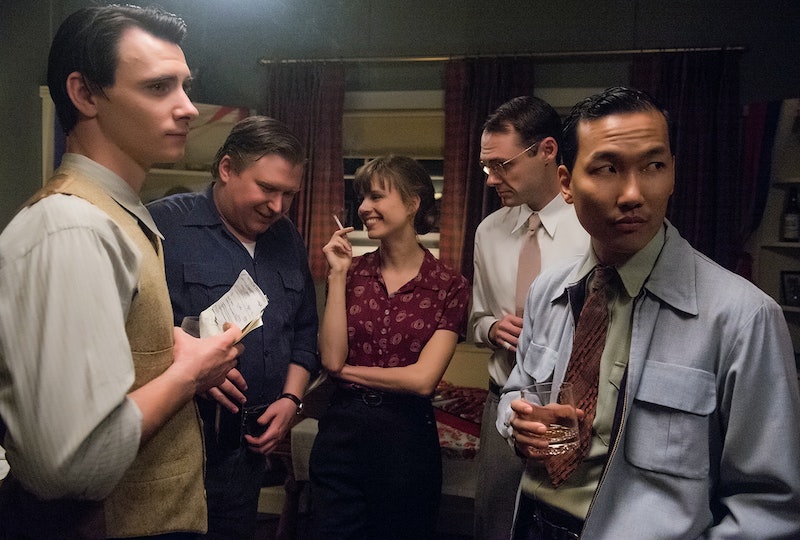 As Manhattan begins to wrap up its first season on WGN, scientist Frank Winter and his crew are getting closer and closer to the development of an atomic bomb. Since we know how that turns out — history can be the worst spoiler of them all — it may leave fans wondering about what the show would do with a second season, or a third or a fourth. Though Manhattan hasn't been renewed for Season 2 yet— its finale airs September 28 — I asked creator Sam Shaw about his plans for taking the story into the Atomic Age. Update: As of Oct. 14, WGN America has renewed Manhattan for a second season.

Before we talk about the future, it's worth taking stock of what the first season was actually about. It might seem like a history of the development of the bomb, but Shaw is quick to point out that it's not a docudrama. "Our show is really much more about the interior lives and the private lives of our characters than it is about the history itself," he says. Even if this history of the bomb is a foregone conclusion, the moral dilemmas for the scientists behind it can continue into future seasons.

"To me, this is a very contemporary story," he says. "I think of it as the great origin story of 21st-century America."

We might not realize how much of American history can be traced back to that moment in the desert. "One thing that fascinated me as I was researching Los Alamos was that this odd little bubble community in the desert was also the prototype for the suburban explosion of the 1950s," he says. "It was the first top-down planned community in this country and became a template for Levittown. So there’s this odd coincidence — or maybe not coincidence — that the suburbs and the atomic bomb were born from the same womb."

So, does that mean that the cast will be headed to the suburbs in a second season? "I’m loathe to say too much — no spoilers," he warns. "But I will say this: From the very beginning, the concept of this show for was not a show about World War II or even the end of that war. I see this show as an origin story about the America that we became the moment that we developed the bomb."

And the series has certainly accomplished that in its first season. "The hope is that we’ll get to tell the story for many seasons, and I think people will see the story of these people in this world that we set up becomes more complicated, morally fraught, and more interesting after the bombs are dropped and we enter a very different moment — the fog of a Cold War," says Shaw of his Season 2 ambitions.

Shaw also notes that being on WGN America — a network with only two original series, Manhattan and Salem — means he gets a little creative wiggle room. "I think it’s not a coincidence that so much of the best TV we’ve seen over the last 10 or 15 years has been the first forays of networks," he says. "[We saw it at] HBO when it started doing original programming with Sex and the City and The Sopranos, FX, AMC with Mad Men and Breaking Bad, and then more recently at Sundance with Top of the Lake and Rectify. There’s a tradition with new networks taking gambles on the creative vision of writers and directors."

Hopefully, WGN will take a gamble of a second season of Manhattan.