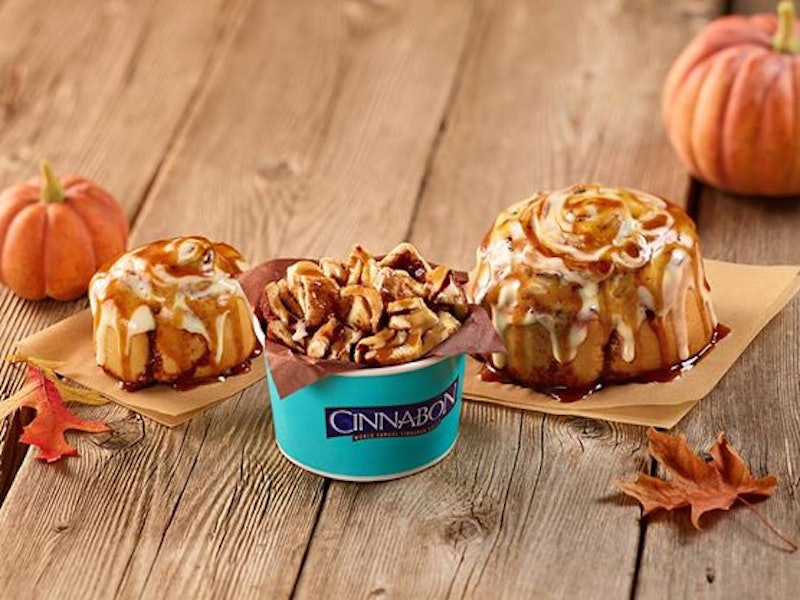 It’s official: Pumpkin spice season has officially reached maximum ridiculousness. The bakery chain beloved of frequent air travelers everywhere (or maybe just in the US), Cinnabon, has hopped on the pumpkin spice train with their new fall menu. Of course the offerings capitalize on our admittedly bizarre obsession with all things pumpkin-y, cinnamon-y, and nutmeg-y, and to be honest, I’m not sure if I should be thrilled or horrified. I didn’t think it was possible for any food or drink item to be more basic than the Starbucks Pumpkin Spice Latte, but, well… I stand corrected.

According to Business Wire, Cinnabon’s fall menu takes center stage from now through November 30 with three limited edition baked goods and one wild and crazy drink. The Pumpkin Caramel Classic Roll gives the bakery chain’s regular cinnamon rolls an autumnal makeover with a dose of pumpkin pie spice and a drizzle of caramel (which, by the way, doesn’t replacec the standard cream cheese frosting — it sits on top of it); the Pumpkin Caramel MiniBon Roll and Center of the Roll have undergone similar transformations, with the end result being a completely out-of-control pumpkin caramel explosion.

It’s possible that the three cinnamon bun options have been around in previous years; I’m not actually sure if that’s the case, as I’ve never lived near enough to a Cinnabon to partake in their fall offerings. But according to Brand Eating, they’re “returning” for this year, so do with that what you will. What is new this year, though, is the Pumpkin Pie Chillatta, a crazy pumpkin, cinnamon, and caramel version of the chain’s signature specialty drink topped with pumpkin pie crumbles, whipped cream, and a caramel drizzle. Who cares that iced coffee season is over? Pumpkin Pie Chillatta, you guys.

This? Yum. Even if it's terrible for you.

I keep wondering if we’ll ever grow weary of this particular trend; after all, there are other flavors that fall might taste of. Apple turnovers, for example. Mulled cider. Cinnamon quick bread.Maple syrup. Butternut squash. But you know what? I’m an unabashed pumpkin spice lover. If that makes me basic, so be it. I embrace it wholeheartedly. Long live fall!