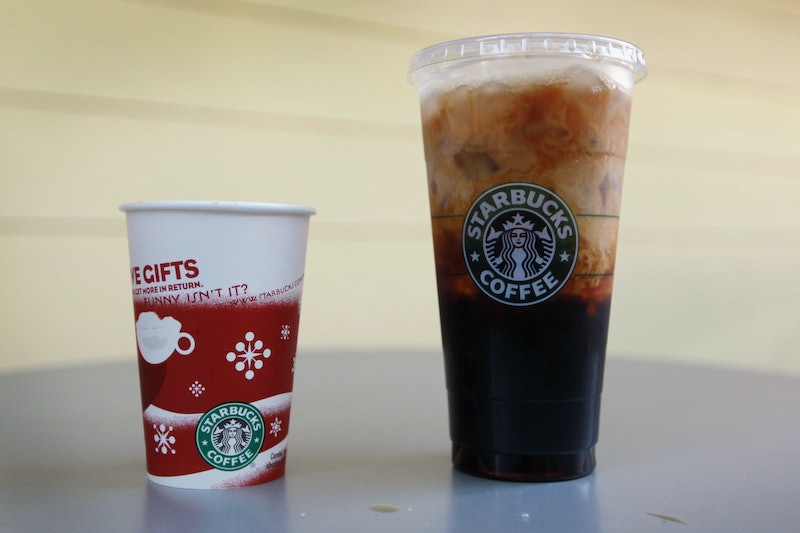 As an avid iced coffee drinker and an environmentally conscious caffeine addict, I spent every day this summer with a reusable iced coffee cup tucked under my arm. If I had to estimate how many times I used it, I would guess approximately one billion, and I won't even begin to count how many baristas thought I said "and a plain croissant" instead of "in a personal cup." Not that I minded, of course, because, HECK YEAH I want a plain croissant, and hey, at least I didn't have to worry about them spelling my name right.

But then August rolled around and with it, the official start of fall (at least by coffee standards), and then just this week I showed up at work wearing both a jacket and a scarf shivering as I sipped on my favorite iced beverage, and I realized it might be time to retire my beloved cup. "But what will the baristas think of me?!" I wondered. "I don't have a personal cup for hot drinks. And what about the croissants!"

I wasn't sure if I was ready for hot coffee, but I knew I was ready for fall. I've been waiting far too long for sweater weather and Parks and Recreation to make their comebacks. So with visions of apple picking and pumpkin spice lattes dancing in my head, I said goodbye to my dear iced coffee, and said hello to its (hotter) twin brother.

Don't underestimate the transition from iced coffee to hot. It can be jarring to say the least, and it's not for the faint of heart. But there are ways to cope, and I'll be here with you the entire time to walk you through it. Here is my seven-step process:

Let your hot cup of coffee sit out and cool down until it reaches that perfect temperature where it is neither too hot nor too cold. Then chug it as fast as you can because coffee only stays at that temperature for about four seconds, according to science, and also because lukewarm coffee is awful, and you don't want to spend anymore time drinking that stuff than necessary.

Channel your younger self — the one who briefly considered becoming an actor — and step into the role of Agent Dale Cooper of Twin Peaks. Man, does this guy enjoy a cup of joe. I don't think I've loved anything the way Agent Dale Cooper loves coffee. If there is anyone who can convince you to love hot coffee, it's him.

Yeah, I said it. Consider giving it up. Coffee is a drug. Even when diluted with ice, it makes you a jittery, angry monster with shaky hands and twitchy knees, and the only thing you'll talk about to anyone who will listen is that you just cannot without your morning cup of poison... or maybe that's just me. The point is, this is the perfect opportunity to free yourself from the chains of a caffeine addiction.

Hahahahaha, just kidding. Giving that up is way too scary.

Iced coffee is usually about a dollar more than its hot counterpart. If retail therapy is a thing that works for you, consider easing the pain by continuing to shell out the extra money for your iced beverage. But just think — you could also be saving that cash for something equally as delicious, and slightly more seasonally appropriate (pumpkin spice lattes HELLO). Just remember to tip your baristas, y'all!

Remember that all good things must come to an end. You can even use that as the caption for when you post your #tbt selfie with iced coffee (a coping mechanism I can't say enough about).

7. Pretend Nothing Has Changed

You can always act like the weather is not changing, and that earth isn't rotating over 1,000 miles per hour. The easiest way to do this is to double down on those fall layers. Instead of wearing one scarf, wear 12. You'll be extra warm, which means you can keep ordering that iced coffee through even the coldest of seasons.

More like this
Heinz Is Selling A Sprayable Mayo Mousse
By Maxine Harrison
Are We Drinking Rosé All Wrong?
By Sheila Yasmin Marikar
Meet The Spice Company Founder Who Sees Chai As A Metaphor
By Madhuri Sathish-Van Atta
If Your Refrigerator Is A Mess, These 25 Organizing Products Can Help
By Courtney Young
Get Even More From Bustle — Sign Up For The Newsletter