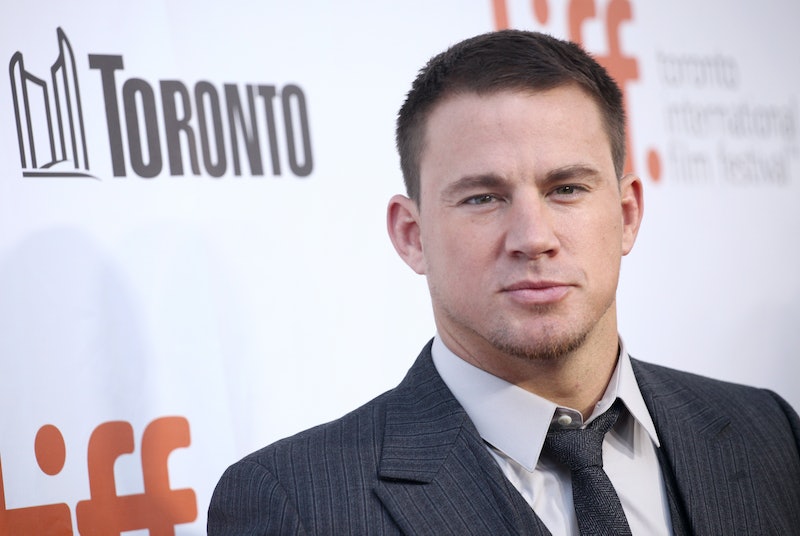 It's probably common news by now that Channing Tatum has something a little more dramatic than the Magic Mike sequel looming on the horizon of his career. On Wednesday, Tatum was announced to be starring in Struck by Genius, a screen adaptation of a book about a man who becomes a mathematical genius after a mugging. The film is part of Tatum's slow and steady takeover of Hollywood and an effort to add more dramatic roles to his resume, although comedies such as She's the Man, 21 Jump Street, and Magic Mike are really where he shines. Then again, it's not just the lack of comedy factor that makes Struck by Genius seem like such a snooze to me. It's just that, I mean, I think we all already knew that Tatum is a genius.

It surely can't just be me who can point to several instances in Tatum's life or career that prove we're dealing with a man of above average intelligence. You need to have more than just a couple of brain cells in your head to launch the kind of rise to fame that Tatum, voted this year's MTV Movie Award Trailblazer, is in the midst of. In fact narrowing it down to eight was the hardest part about all this. If nothing else, Tatum won't have a hard time getting into character considering all the times he flaunted his genius in our faces.

Look at them. Look how cute they are. Tatum and Dewan-Tatum met on the set of Step Up and have been married for five years with one child, Everly, under their belt. Clearly Tatum has genius taste in women.

Tatum is a man of many skills, but perhaps he has none as impressive as his kung fu skills. According to Moviefone, Tatum practiced Gor-Chor Kung-Fu as a child. Not only is that a smart move in general, knowing how to defend yourself, but it's an even more genius move now that he has a family. I pity the first stalker to try and break into the Tatum house.

3. He admitted to his alcoholism.

In an interview with GQ, Tatum admitted he was a high-functioning alcoholic and basically changed our entire perception of him. It wasn't that he received negative backlash for the interview or anything. It was more that the calm and thoughtful way that Tatum admitted to his problem made him even more likable and relatable to his fans. It's always a smart move to admit when you have a problem, but the way in which he went about being honest with everyone pushed him into genius territory.

4. He opened his own burlesque club.

Did you know that Tatum has a restaurant-bar in New Orleans called Saints and Sinners? No? Well now you know. The burlesque club is located on the infamous Bourbon Street and even somehow managed to swing an A&E reality TV show following the dancers at Saints and Sinners, if that ever gets off the ground. How many not-geniuses do you know who can turn their club into a reality show?

5. He tuned his experiences into Magic Mike.

As it turns out, before he got famous Tatum worked as a stripper. I mean, amongst other things, but Magic Mike was a real thing once upon a time. Or, rather, I should say Magic Chan Crawford since that was the name that Tatum performed under. For some, stripping is either a way of life or something to be ashamed of and hide or both. For a genius like Tatum, it's a blockbuster movie with a sequel on the way.

6. He got naked on Running Wild.

Listen, any time that Tatum takes his shirt off is a genius move for him because, let's be real, that's what we all show up to his movies for.

Tatum once said that he would love to be considered the female Jennifer Lawrence because he considers her very cool. You would have to be the exact opposite of a genius not to realize that Lawrence is basically the coolest person on the planet right now. Second only to Taylor Swift.

Okay, so Tatum hasn't actually been Gambit yet, but it takes a pretty smart guy to turn his shameless fanboying of Gambit into a legitimate film role that's coming up. I mean, really, if I could go from being a superfan to starring in something, don't you think I'd have used my own genius powers to do that already? Tatum doesn't need to be struck by genius, okay. He's already one.