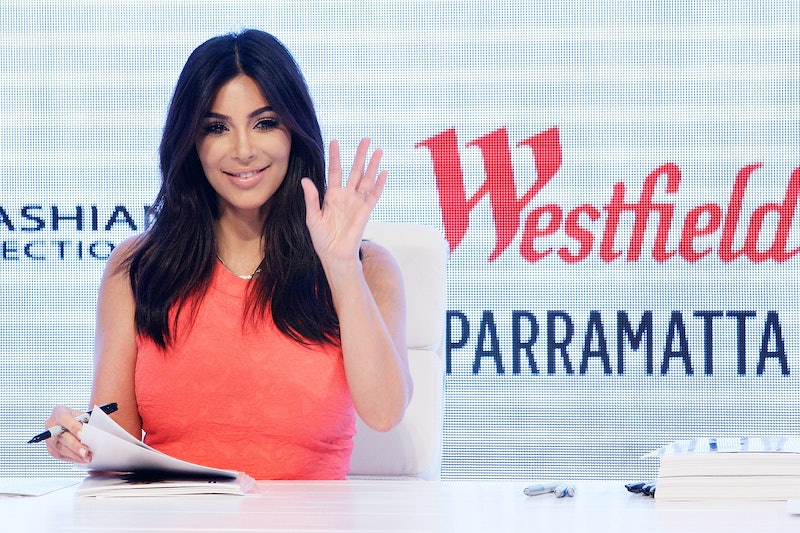 I think many people would agree that a Keeping Up With the Kardashians/Downton Abbey crossover is about as likely to happen as Rob Kardashian having runaway success with his line of luxury socks. But, sometimes the seemingly impossible can occur. Allegedly, Kim Kardashian wants to be on Downton Abbey and is reportedly taking steps to execute her fantasy. In other news, the Dowager Countess of Grantham won't entertain such foolishness.

According to Hollywood Life, Kardashian contacted actress Laura Carmichael (aka Lady Edith), gushing about Downton and expressing how thrilled she would be to make a cameo. The proper person to reach out to in this circumstance probably would have been series creator Julian Fellowes, but this is, well, a step. Her message reportedly read, "I’m a big fan. I’d love to be on it if they asked. I love things like that." World, meet Kim Kardashian: Period soap opera enthusiast. She aspires to be the most anachronistic thing in Downton Abbey season 5, beating out the modern-day water bottle chillin' on the mantle in the promotional materials for the win.

While we're all shaking our heads over the idea of something like this coming to pass, nobody could be more scandalized than the Dowager Countess of Grantham. The HBIC of Downton and primary executor of grandiloquent shade is likely already planning her zingers. I imagine Cousin Violet's reaction to this prospect would go something like this:

First off, she would have no idea who Kim Kardashian is

What is a Kardashian? Is it a new profession? Is it a newfangled dance being done by young people at those, ehm, speakeasies? Upon being explained the KUWTK phenomenon, she would huff superciliously.

The new generation knows nothing of proper comportment.

Whatever that space-age daguerreotype called a "butt selfie" is, the person in this image knows nothing of proper comportment. A woman of such corrupted values belongs only in a house of ill principle.

Then comes the wry contrariness

The bumbling absurdity of this notion is best met with a shrug and an up-turned nose.

Time for the one-liners

In all earnestness, we're not so common as to patronize such requests

Let's be real, guys. We're not that desperate.

Ultimately, she would veto the possibility of this ever happening

There's no arguing with Maggie Smith in a corset.