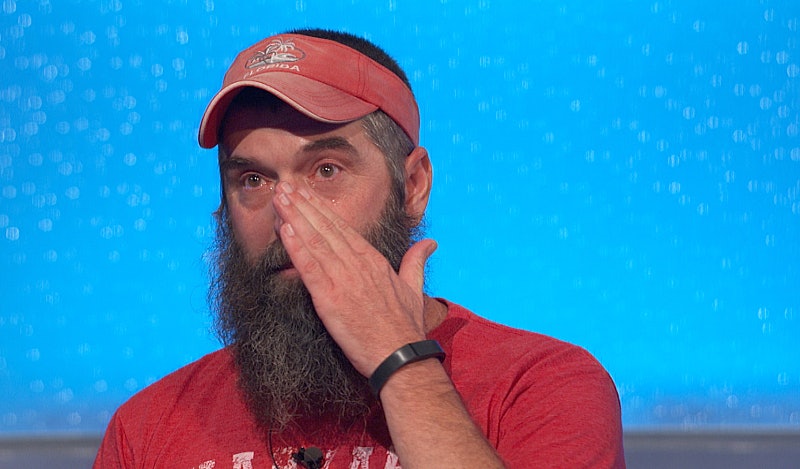 Is everyone still recovering from that totally revelatory and earth-shattering clip show that aired on Big Brother during Friday night's episode? I know, I know. C-R-A-Z-Y. If you can't detect sarcasm in text, I'm totally kidding. However, the episode wasn't a total wash. For one thing, Big Brother finally aired the adorable footage of Izzy the dog visiting the house. Totally worth watching just for that. The other interesting moment was when the houseguests started reminiscing about Donny. Good old Donny.

If you recall, for most of the season, the houseguests thought Donny was hiding a deep, dark secret. Devin at first started the rumors, which were perpetuated by the other Bomb Squad members, including Caleb, Derrick, and Cody. While we all know Donny is truly a groundskeeper from North Carolina, they all thought he was some sort of military-ninja-doctor-professor-genius-actor.

I still don't know why there was so much speculation about this. Donny just seems so genuine, even on a reality show. But you're not really supposed to trust what anyone says on Big Brother, so I guess the concern was valid.

Anyway, during the clip show, Derrick and Cody suddenly changed their tune about Donny. Cody said Donny had "a heart of gold." Derrick agreed. Now that Donny isn't in the house anymore, you would think they would have spoken more candidly about Donny. It's not like Victoria would have been offended by any sort of negative talk behind Donny's back, even though they were friendly toward each other for both being outsiders in the house.

But the thing with this clip shows, if you couldn't tell just by watching, is that Big Brother chooses what clips they want to show of the season, and then the houseguests say some dialogue to set each of them up.

All of America loves Donny, and they all know Donny really does have "a heart of gold." So to cater to fans' wishes, Big Brother chose to air a package that showed Donny as the nice guy of the house, comforting Pow-Pow and winning the Power of Veto for Jocasta when she was too ill to play. Of course, Cody and Derrick would acknowledge Donny's generosity in the season so that the show could air these clips.