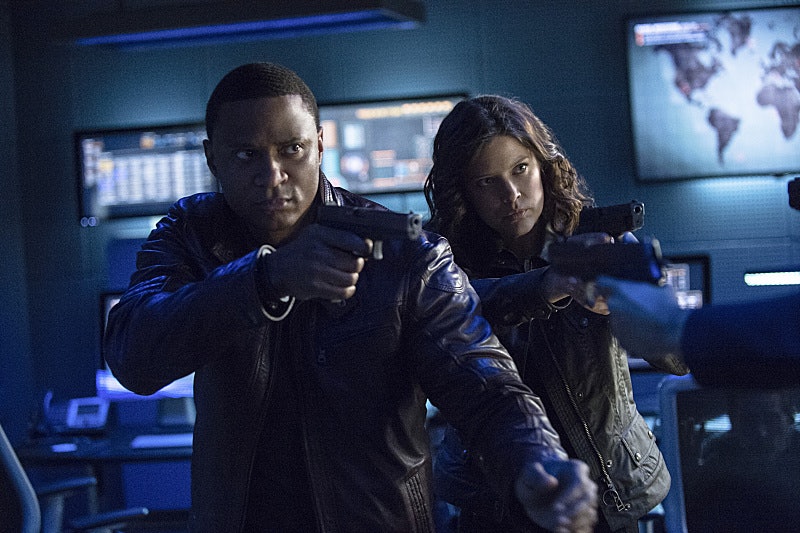 There's a new crime fighting bundle of joy in Starling City. Last season on Arrow, it was revealed that Lyla, Diggle's ex-wife, is pregnant. And while yes, she did keep it a secret from Diggle for a short time, and yes, maybe potential bad guy Amanda Waller was the one to reveal the joyous news on the brink of Starling City blowing up, it's happy news to celebrate. A new baby always breathes a fresh life into any character, because suddenly they've got someone else to think about besides themselves. However, considering that for the most part Diggle has kind of been looking after Oliver as an adult-son who loves to get himself into lots of trouble, what does this mean for the dad-to-be? How will being a father affect Diggle in Season 3?

When Season 3 picks up, we'll have jumped a few months into the future, meaning that Diggle's already got his new bundle of joy. It'll make sense that his priorities shift to the little girl (it's a girl!), but that doesn't mean he'll abandon Team Arrow all together. Or at least he won't unless he's forced. Though he's got a tough guy persona and muscles that say otherwise, Oliver really is a big softy. He should understand that Diggle shouldn't be putting himself in the range of fire so often.

Knowing Diggle, he's still going to show up at the Arrow Cave, expecting to go out with the team and save the city/defend the city/go to Big Belly Burgers. Oliver is more likely to be the one who tries to stop this. And Felicity, being Felicity, will probably side with him on this. We've already seen a little bit of this argument in the Season 2 recap/Season 3 preview released by The CW. Skip to 1:20, or you know, watch the whole thing because it's awesome.

It's true, though. Oliver really would be dead "10 times over" if it weren't for Diggle constantly having his back. Even when Diggle isn't supposed to be covering Oliver's back, he's covering Oliver's back. Maybe Season 3 will bring about a shift in their dynamic. Diggle was always making sure Oliver stayed out of trouble (he was hired as his bodyguard/babysitter, after all), so maybe the addition of a baby brings a role reversal. Now it could be Oliver who is desperately trying to keep Diggle alive, no matter what the cost. Sure, Oliver had his father growing up, but now he knows what it feels like to lose a dad. The last thing Oliver wants to see is that scenario replayed again, let alone because of something he's done.

There's a change coming to Starling City, whether we all like it or not. Considering that Lyla was part of A.R.G.U.S., what does the new baby mean for her own job? What kind of maternity leave plan does A.R.G.U.S. have, anyway? If she's anything like Diggle, which we know she is, she's going to try to get back out into the field as quickly as possible too. But together, Lyla and Diggle need got to stop for a second and think about their little girl. With both parents having such dangerous jobs, that puts their family at risk. Diggle and Lyla both deserve some happiness and I really hope that's what Season 3 brings them, instead of more loss.