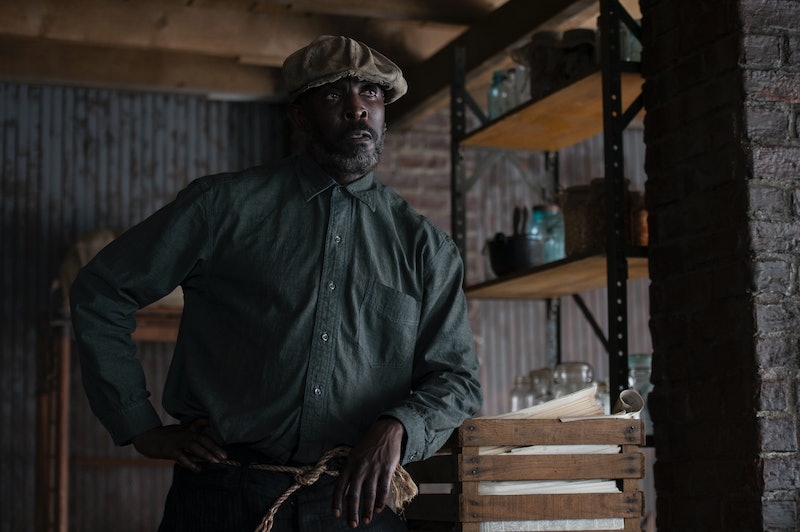 We might have just found our new Season 5 hero, which makes me sad. In the full-circle moment, Sunday night's new episode of Boardwalk Empire set Chalky White up as the new Richard Harrow (RIP). So far, Boardwalk Empire Season 5 has been all about Nucky's past and how it's shaped him and setting up the various power-plays happening this season. But on Sunday night, Boardwalk gave Chalky his first moment to prove himself a changed man since he watched his daughter die and now we can be entirely certain that he'll be a part of Boardwalk's final season's body-count.

Here's what Boardwalk does to the men it's redeemed — it kills them. And it's obvious that Chalky is running the same line that Richard Harrow did in Season 4, which is a good thing because, oddly enough, it fits. In case you missed the Season 4 finale of Boardwalk, Harrow missed his shot on Valentin Narcisse and hit Chalky's daughter instead — killing her. And, naturally, Chalky's pretty damn broken up about it — it's one thing for your daughter to die, but to watch her get shot in front of you is something else. So, it'd be pretty unsettling if he hadn't become a changed man by now.

In the Season 5 premiere, Chalky escaped with another chain gang member and the series' didn't check in with him during last Sunday's episode. This week, we saw Chalky and his friend break into a house and hold a woman and her daughter hostage while looking for a safe. It was obvious that Chalky's heart just wasn't in it — kind of like when Richard was tasked to kill the family dog and couldn't — and when he saw his friend getting handsy with the woman's daughter, he killed him. And it wasn't an easy-kill on the eyes either, Chalky took a hammer and actually beat this guy's skull in before killing him by sticking it in his neck. (Too graphic for you? Sorry.)

The thing about Chalky in this episode, which is similar to the thing about Richard, is that even after I saw him brutally kill this guy, I was rooting for him. Because I totally understood why he did it and the semi-righteous place he was coming from. For Boardwalk to shine a light on the fact that he's definitely changed between this season and the last, in the sense that innocent people won't be casualties on his watch, is huge. He's officially taken a stand regarding what type of person he'll be going forward and it's the same type of person we fell in love with when Richard Harrow became one.

Yes, we're only three episodes into Season 5, but Chalky's motivation is clearly out there now — he's going to make it right for his daughter's memory. Because it was his own actions that landed her in that club last season in the first place. But with this promise that fans can root for Chalky in Season 5, also comes the promise that he could go exactly the way Richard did. He'll reach his peace and then he'll lose it in the most poetic way.