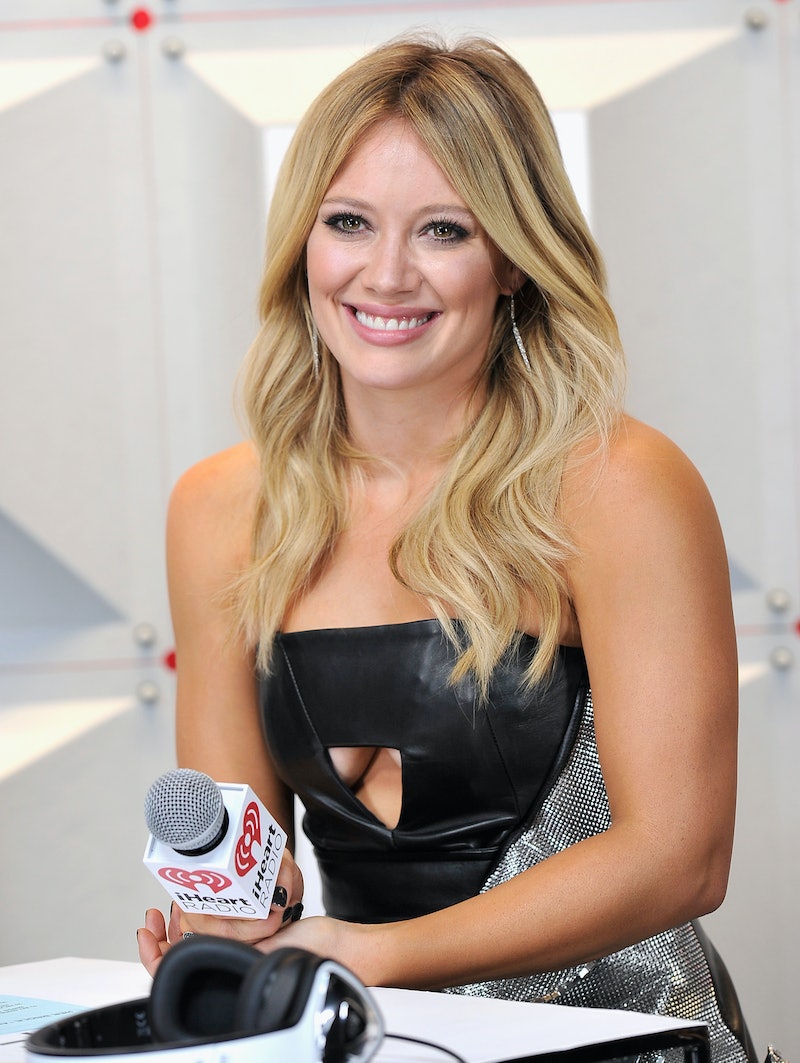 Get ready to feel nostalgic for your childhood because Hilary Duff just said she's open to a Lizzie McGuire reunion. When asked if she'd ever thought about rejoining the cast of the Disney show, Duff replied, "I love it! I would be totally open to it. My schedule is a little busy right now. But um … why not?" Fans of the movie spinoff of the series will remember that "Why Not?" was the name of one of the tracks Duff recorded for the film. It's great to see that even 10 years after the show concluded, it's still so near to her heart.

I mean, so many people loved her. I loved her. Honestly, working on that show, I got so strong with my physical comedy and all the things that they would throw at me. I got covered in goo every week, and I got, like, smashed in the face with a locker every single week ... It was a really, really fun show.

I was excited when I learned she would be returning to TV at all in her new show Younger. Then I found out Duff is also releasing an album. Between all that, A Lizzie McGuire reunion is almost too much perfection to handle. Whether it's a TV show reboot like Boy Meets World , or just a movie showing where the characters are now, it would be awesome.

Duff even suggested a theme for the reunion. "Maybe a Lizzie: Where Are You Now? like 10 years later," she said. Going off what Duff herself suggested, here are some plot points the reunion could touch on.

WHERE LIZZIE AND GORDO ARE TODAY

For our Lizzie McGuire shipping dreams to come true, it would be great to see Lizzie married to her best friend Gordo, maybe even with a baby on the way? It would be hilarious to see the kind of parent Lizzie would be since we last saw her going through her own tumultuous teenager-hood. I'd like to think she'd learn from those experiences and at least suggest to her daughter that she get a bra before her daughter has a meltdown like this:

WHAT HER FAMILY IS UP TO

I'm sure even 10 years in the future, her parents are still loveably dorky. But what about her younger brother Matt? He was the ultimate troublemaker and I'd like to think he never really loses that. Instead maybe he puts his spying abilities to better use. Perhaps he's on track for a career in the FBI or CIA where they'll relish his surveillance ability.

WHAT HAPPENED TO MIRANDA?

Miranda wasn't in the movie so it would be nice to see her back for the reunion. Then we could find out to if hers and Lizzie's friendship stood the test of time. But of course it would. BFFs like these are hard to come by and should last a lifetime.

IS KATE STILL A BULLY?

Kate Sanders made Lizzie's life a nightmare in middle school. But in the movie, she had a change of heart, even helping cover for Lizzie who was sneaking out. I bet in the future she's running some company where she is a fervent supporter of Leaning In and not being called bossy. Perhaps she and Lizzie have remained close enough friends to get wedding and baby shower invites.

WHAT HAPPENED TO ETHAN?

Oh Ethan. Adorable and dumb, he was the ultimate middle school crush but wasn't going very far in life. But I always had a soft spot for him and his stupidity, so I'd like to believe he turned things around a little. Maybe he even ended up being a teacher to help encourage students to love school by using unconventional methods like art therapy and watching movies without having to fill out a question and answer sheet. (The dream teacher, basically.)

But honestly, if the cast ever did reunite for a project, it wouldn't matter what they did. I just want to see them all in the same room together. Fingers crossed such a thing can happen someday!