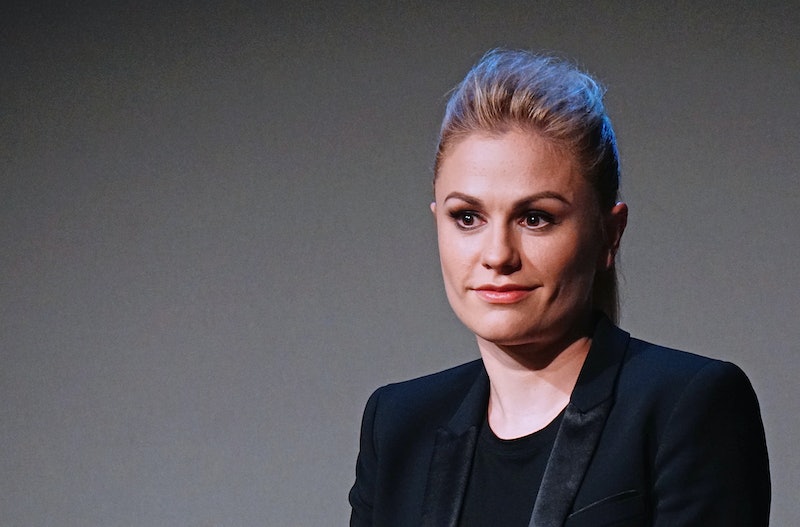 Tuesday, Sept. 23, is officially Bisexual Visibility Day, and man, do people need to made aware of us. We may not be a big group — only 0.7 percent of Americans identify as bisexual — but that doesn't mean we aren't here. In fact, our small numbers just might represent the fact that as a group, bisexual people are often especially stigmatized.

Don't get it twisted: Bisexual individuals can definitely benefit from heterosexual privilege, in so far as they have the ability to be in "socially acceptable" relationships, where as gay and lesbian people may not.

But from being told our orientation doesn't exist, to being accused of lying to get attention, the experience of coming out as bisexual comes with its own list of unique difficulties. The misconceptions about what it means to be bi are so common that even Anna Paquin had to school Larry King on bisexuality when he asked her some quintessentially ignorant questions earlier this year.

As a bi woman, I, along with every bisexual person I've met, have heard the same handful of these ill-informed questions whenever I've chosen to open up about my orientation. Here are 11 things we bi women are just plain tired of hearing.

You're just bi to get guys' attention

Women definitely hear this one more often than men. Sure, being bi-curious may be different from being bisexual. But the trick to figuring out if someone is "really bi" is simple: If they say, "I'm bisexual," then they are bisexual. End of story. They don't need to pull out their bisexual license or pass any other qualifying exams for you.

but You've never kissed/slept with/dated a girl, so you can't really be bi

I think you and I both know you didn't make out with Channing Tatum before listing him as your sexuality on Facebook. What I've done is totally irrelevant.

Are you sure you aren't a lesbian?

People on both sides of the spectrum are guilty of this one. I'm pretty sure the first question you ask yourself after you realize you're attracted to someone of your same sex is,"Am I gay?" But for those of us who are bi, the answer is clearly no.

But no, you're right, this is obviously just some denial-based delusion we've all conned ourselves into over the years in order to avoid admitting to ourselves that we're gay. We're so delusional we've even made a flag for ourselves and opened up exhibits about our history. But now, thanks to you, we'll never have to lie to the world and ourselves ever again.

i bet that i can change your mind

Nope, and now you're definitely not getting in my pants.

You just want to sleep with everyone

Being bisexual means being attracted to men and women — not all men and women, just the ones we find attractive. It's absurd that we still have to make this distinction, but apparently we do.

you'll grow out of it, i bet

men are so annoying, i wish i could date girls!

Uh, you can. But I'm not bi because I sometimes get tired of guys. It's not like women are the other white meat.

But you'll have to eventually become gay or straight if you get married, right?

While for most of us marriage means settling down with one person and being faithful to them, it's not like there's a switch we can flip on our butts somewhere to make us gay or straight. Our partner will just have to respect that its something we can't change, the same way we will respect their orientation.

I don't date bi girls because they'll just leave me

People leave their significant others for other people every day, regardless of orientation. To insinuate that bisexuals are more likely to do so than others, and to shun them as a result, is just ignorant.

No. Being bi doesn't make me any more inclined than anyone else to want to sleep with you and your boyfriend.