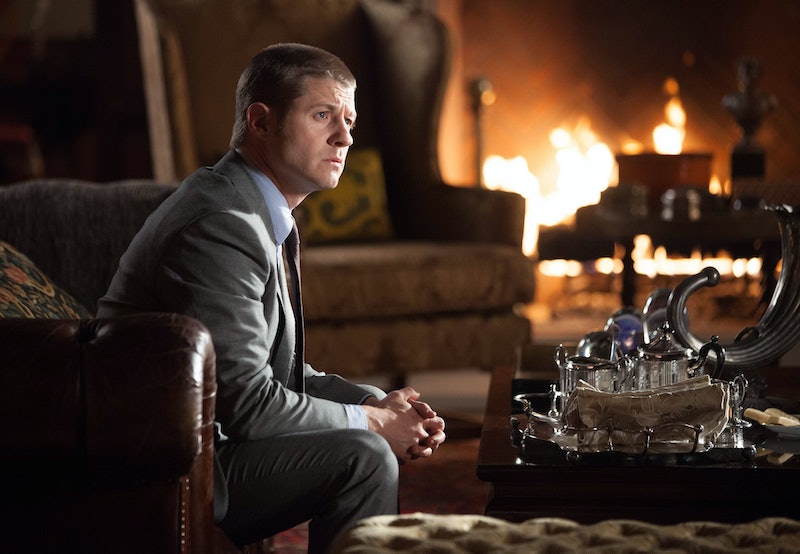 James Gordon is best known as the grizzled police commissioner of Gotham City in the Batman comics, cartoons, movies, and TV series. In FOX's Gotham , we'll see Detective Jim Gordon begin his career and Gotham City before Batman decided to take the crime-ridden city into his own hands. Like the rest of the characters in the original Batman canon, Gordon was created by Bob Kane and Bill Finger and originally introduced in 1939. As Batman comics have gotten more dark and complex over the years, so have Gordon's various fates. So if you're wondering what happens to Gordon in the comics, well, Gotham fans should have a lot to look forward to.

While during the "Golden Age" of comics — the late 1930s through early '50s — Batman and Gordon were close allies and always vanquished their villains, the comics started taking a darker turn in the '70s and '80s. This time was considered the Bronze Age of comics, with darker elements and many heroes becoming more human and fallible. While the campy Adam West TV show showcased the more lighthearted Golden Age era, the comics started to build ambiguity into Gordon's role. At times, he still relied on Batman, but in other stories he was skeptical of the hero's motives, and sometimes forced to hide their relationship.

Even in the darker comic timelines, Gordon is a remarkably strong and principled cop — most famously, in The Killing Joke , even when kidnapped and tortured by the Joker, he insists that Joker be apprehended without being killed, in order to preserve order and prove Batman's way is right. Particularly in the period from 1990-2000, Gordon is often the first character to be targeted by Gotham's supervillains, showing how dark and corrupt Gotham is.

Between 2003-2006, Greg Rucka and Ed Brubaker wrote Gotham Central , a series of comics that, like a procedural, covered the day-to-day experiences of the GCPD. While Gordon was only a recurring character, the Gotham Central series is probably the most tonally similar to the Gordon we'll get to see on TV's Gotham. Even DC Comics thinks Gotham fans should check it out.

As Batman's biggest ally and the most well developed member of Gotham City PD, Gordon is rarely (if ever) killed off, but is frequently kidnapped, assaulted, tortured, or shot. There have been a lot of close calls, such as when he covered the short series Officer Down splayed on the street in a pool of his own blood, shot thrice by an unknown assailant that Batman and Batgirl team up to find. While Gordon lived through the assault, he eventually retires after suffering so many close calls with death.

He is succeeded as the Gotham Police Commissioner by his second wife, Sarah Essen. From there, while Gordon occasionally returns to the force or chips in with mysteries, he's largely replaced as Batman's closest confidante by Dick Grayson's Robin and Gordon's own daughter, Barbara, who takes on the alter ego Batgirl. So there's plenty ahead for the writers and producers of Gotham to dive into — and while in the comics, Gordon's been battered around his fair share, he's made it through 75 years worth of adventures.