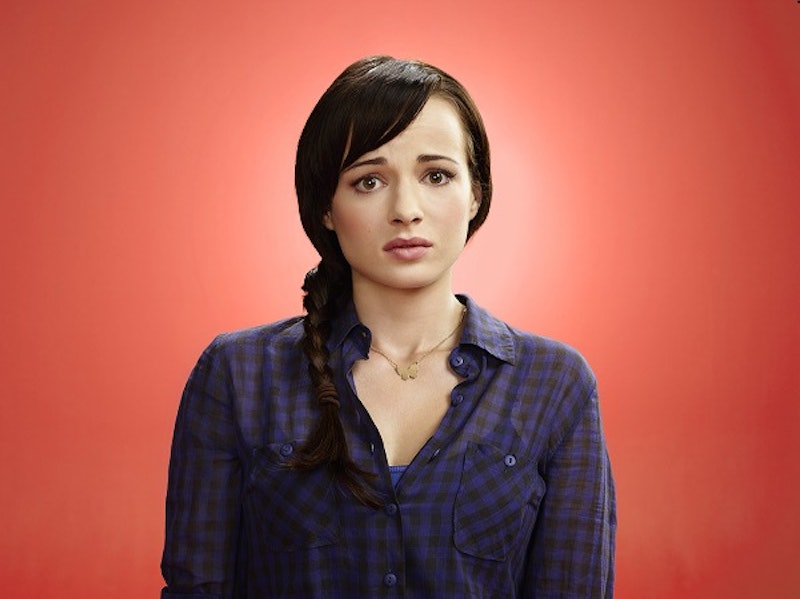 It's finally time. The second half of Season 4 of MTV’s Awkward. starts Tuesday night, and the story lines are pretty complex at this point. Everyone has dated everyone and you’ve probably forgotten where we are at in the series and what has happened thus far. I don’t blame you, Matty and Jenna have a more complicated relationship than Ross and Rachel from Friends. There are plenty of things we are hoping will happen during the rest of the Awkward. season, like Matty and Jenna finally getting back together or Eva getting booted from the show (because she is the worst), but before I start talking about all the things I hope will happen, let me refresh your memory everything that went down in the past 11 episodes.

In case you've already forgotten, the fourth season began after Jenna made a total mess of her junior year. She cheated on Matty with Colin, started doing drugs (for like a week), and just totally turned into a complete biatch. To top it all off, she got Val fired for over-involving herself in her students' lives. In a nutshell, Jenna ruined everyone's lives last season because she was so busy being awful. So, it was a pleasant surprise when the old Jenna was back for the start of Season 4. Thank goodness.

The fourth season begins kind of like the part in Mean Girls where Cady Heron sucks all the poison out of her life. Great comparison, I know. She spends her time getting her shit together by apologizing to Val, getting her her job back, and making amends with her friends who she cast aside in Season 3.

In the beginning of the season, Jenna attempts to focus on school, which is never really easy in high school. So instead, Matty and Jenna try to become friends with benefits. The common side effect that comes along with FWB is feelings, and of course Jenna can't handle the hook-up relationship with Matty. So, that ends.

However, Matty’s weird behavior really had nothing to do with Jenna, because he'd actually just found out that he was adopted. So, there's that too and he's still pretty pissed about Jenna assuming his distant nature was all about her. Hopefully they tie that up in the upcoming episodes.

Tamara gets wildly depressed after she and Jake split up, so she starts trying to get his attention in any way she can. Jake has suddenly gone from preppy to kind of a music-loving hippie. So, Tamara decides to create a fake online persona — pretty much just Tamara with an Australian accent — and catfishes Jake throughout the season. He obviously finds out and gets upset, but by the mid-season finale they talk things out and decide to remain friends so long as she stops acting like a crazy psychopath. Pretty fair deal.

Eva is new and she's an actually psycho, so she makes Tamara look normal. She sabotages Matty and Jenna's friendship by deleting texts and creating fights. Finally, Sadie comes in and does a little digging into Eva's past and it out she lives in her grandmother's basement and has been obsessed with Matty for a long time. Eva planned out this entire scheme to get rid of everyone around Matty and keep him for herself. And she actually succeeds. In the last episode of the mid-season, Eva "discovers" (using that term loosely because I’m still not convinced she's being genuine) that she’s pregnant. Jenna and Sadie force her to take a test and right when she shows it’s positive, the season ends. Cliffhanger much?

Sadie is officially poor and dealing with it throughout the season. Lissa takes over the job as cheer captain and we find out that Sadie has been working in a food truck to earn money while she lives with Ally (you know, the older woman who calls Jenna "Lil' Bitch"). Oh yeah, and Eva breaks up Sadie and Austin by blackmailing Sadie. Our new food service darling is on a serious mission to bring Eva down, which we'll see through the rest of the season when Awkward. returns.

Lissa goes off to Africa to do some charity work for God and comes back with an adopted brother Tyler. He is around throughout the season, but in the last episode, they have a weird moment filled with sexual tension and it’s pretty, well, awkward. He reminds her that they aren't actually related to one another, but yeah, I am on Team Lissa for this one. It's pretty weird and it needs to end now.

Jenna heads away on a college overnight trip and meets Luke. Luke is a sweet, smart college boy who she begins to date. And this is where I need to interject: unless you're already dating someone who's still in high school, it's pretty weird to start a relationship with someone who is still in high school when you're in college. Just saying.

Of course Jenna's still in love with Matty and Luke isn't an idiot. Even though Eva pretty much sets Jenna up to look crazy, you really can't blame anyone but Jenna for screwing things up with Luke. Jenna and her college boy date for like four episodes and break up in the mid-season finale because he's in college and she's in high school. Typical.

Valerie Marks needs a love interest STAT. Nothing much happens with her besides her hitting on random guys throughout the season — including, but not limited to a man dressed in an animal costume. It's time for her to get a bigger role (and by that, I mean more men in her life).

Both of them are still trying to act like kids and adults at the same time. Nothing new here, folks.

Of course, any and all of this could change when Awkward. returns. And as long as Eva gets what's coming to her, I'll be on board.