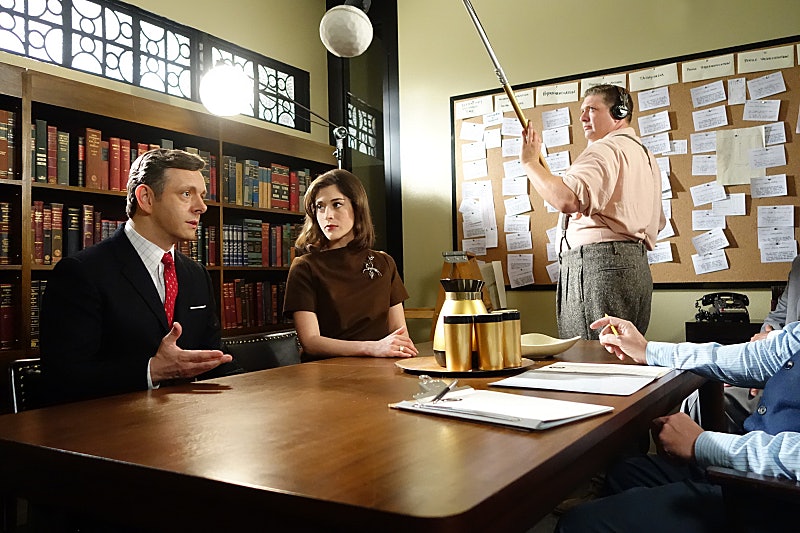 This week as the second season of Masters of Sex heads towards a finale, we got an episode that one way or another was all about being seen. From little touches like the conversations at the Congress of Racial Equality about how the mainstream news isn't covering the arrest of Dr. Martin Luther King, to the camera crews filming a Masters and Johnson film segment, everything is all about what it is to be seen — and it seems that no one is invisible anymore at this point in the show. Even Lester went from mild-mannered background presence to really standing up to Dr. Masters. With all our characters getting more boisterous by the minute, the season finale next week is bound to be crazy.

The three biggest storylines this week, though, revolve around Virginia, Libby and the TV segment CBS is making about the study.

Virginia, rather than being seen herself, is having to face up to some things she's been ignoring about her family life. When her ex-husband George asks to take the kids to Europe for six weeks with him and his second wife while he's on tour, Virginia does not react well. As she points out, the kids haven't ever spent more than three nights in a row with their father. But after some heated words with George and talking to her lawyer, she decides the trip isn't the worst idea in the world. But it forces her to open her eyes to the fact that other people are essentially raising her children. Having someone point out how much she works, watching her kids with their babysitter, and listening to the kids talk about what things are like at their dad's house really makes her open her eyes to the fact that, though she is a good mother, she's not the end all be all of her children's world. And really letting that sink in — especially just before her kids are about to go off for six weeks — kind of sucks.

Meanwhile, Libby's relationship with Robert, the CORE organizer she works with, gets intense this episode. After watching Bill and Virginia on camera talking about their work and finishing each other's sentences, she also seems to be facing up to some unpleasant facts, though whether she really knows about the affair or just hates that her husband is emotionally closer to another woman (or both) is unclear. After Robert drives her home and the two are stopped by a cop who doesn't like the sight of a black man in a nice neighborhood, especially with a white woman, Libby invites Robert inside to sidestep what was clearly escalating into a very, very bad situation. She winds up telling him about how refreshing it is to simply be around someone who doesn't like her. That after so many years of being the good girl, of trying to mold herself into the person people want her to be she feels invisible. And the thing she was always so afraid of, having someone think ill of her, actually feels good because he actually sees her, including the not good parts.

Robert, for his part, responds to this with the totally justified anger that someone would think being mistreated makes a person "more alive." He also makes some very true points about white women with low self-esteem purposefully "degrading" themselves by sleeping with black men. And he's not wrong about any of it, or about the cop down the street, the neighbor who saw him come in, or the kids asleep in the bedroom. But they still wind up having sex on the kitchen floor.

It's also a somewhat self-reflexive moment for the show, since obviously television has come a long way when it comes to representing sex on screen — which likely would not have happened without the sort of cultural conversations Masters and Johnson first kicked off. I feel like there might be some universe-ending loops in there somewhere.

The episode ends, however, with confronting his insecurities in the observation room after everyone else leaves for the night, and Virginia hugging him tightly, making it clear that the sex isn't why she's with him.

It's unclear to what extent bringing personal revelations might help anyone — as Flo tells Langham this episode, "When has self-awareness ever changed a person's behavior?" — but as Bill tells the cameras, bringing things into the light is the first step to change.

Now we'll see how much all of this blows in the season finale next week.