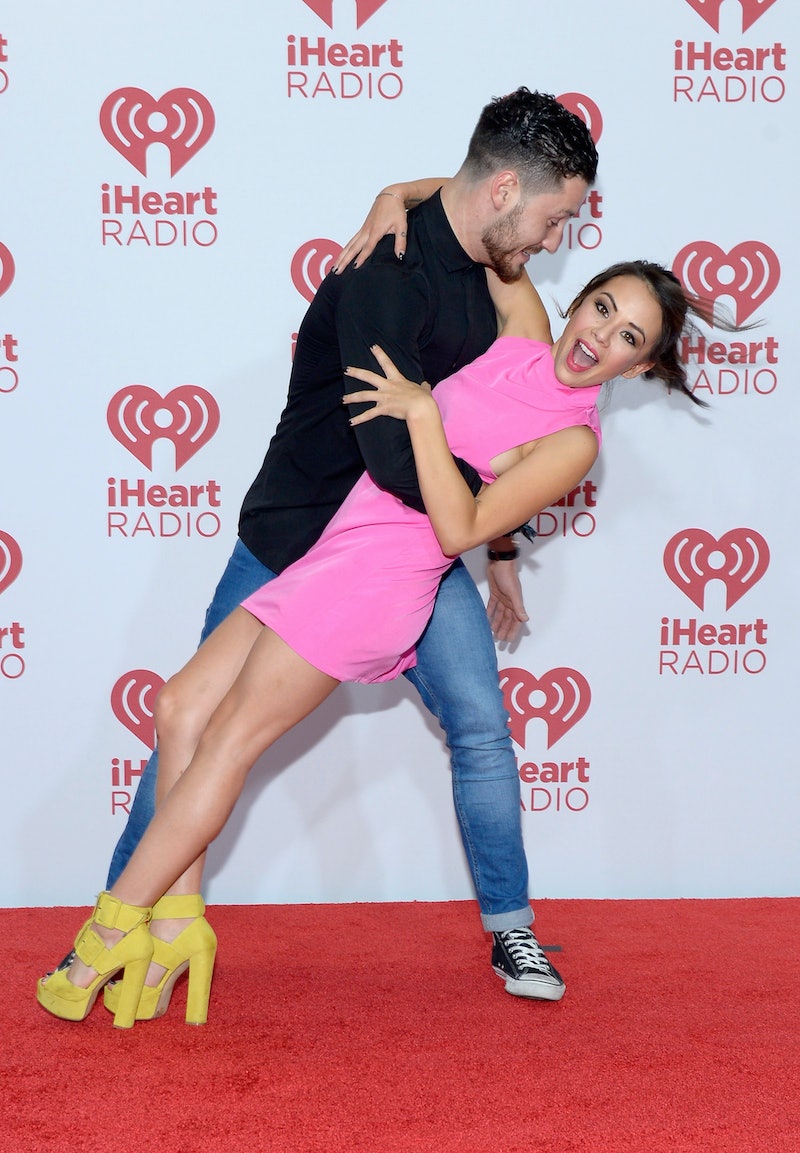 Am I the only one who was completely surprised when Pretty Little Liars star Janel Parrish and her Dancing With the Stars partner Val Chmerkovskiy only placed seventh during their first week of competition? The judges described their performance as “spicy hot” and “sharp and clean,” and Chmerkovskiy revealed his confidence that they are “a match made in heaven.” The chemistry between the two was undeniable during their performance to “Bang Bang,” but it also proved that Parrish could jive! I’m willing to bet that the judges went a little harder on the couple because it’s pretty clear that Parrish has a little dance training under her belt.

After all, we already know Parrish is musical. Last season on Pretty Little Liars, fans discovered that Parrish's character Mona could sing and it was a very pleasant surprise. As a PLL fan, when I heard that Parrish was going to be part of DWTS Season 19's cast, I immediately had a hunch that she would have the moves to make it on the show. With vocal chops like that, she must have a little rhythm in her blood. The girl can sing, the girl can act, she can play piano, and so she has to be able to dance, right? As it turns out, Parrish recently began blogging about her DWTS experience for People.com, where she divulged her dirty little secret: Janel Parrish has been dancing since she was six years old.

In and out of dance classes her whole life, Parrish has some dance background in jazz, hip-hop, tap and ballet and has even appeared in Broadway musicals like Les Miserables. In her blog, she explains that she has never done anything with partnering or ballroom, but that doesn’t mean that her experience as a kid won’t help her now.

Even if she won’t admit it, Parrish’s music and acting experience is a major advantage for Team Janelskiy. Since she has spent a good chunk of her life learning choreography of all different genres and memorizing lines for a plethora of roles, exhibiting new styles and a range of different emotions will probably come as second nature to her. After all, ballroom dancing is just like riding a bike. Right? OK, no it’s not, but after the first week of competition, I don’t think anyone is questioning whether Parrish has what it takes to make it to the final three.

Her PLL costar Ashley Benson certainly thinks Parrish has all the moves. Benson predicted the mirrorball would either go to YouTube star Bethany Mota or Parrish, who she says is amazing and absolutely deserves it.

Parrish will undoubtedly have thousands of PLL fans waiting at the phone to vote for her every week, so it’s likely she isn’t going anywhere any time soon. But it’s her talent, more than anything, that makes her a top contender this season.

She’s already got the music in her soul. She just needs to keep up to that sexy Janelskiy chemistry and show off her confidence in the ballroom and the trophy is hers.