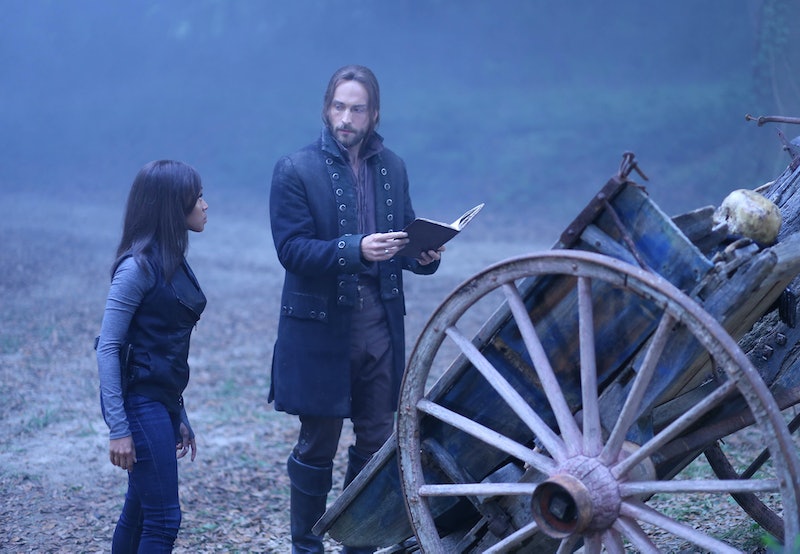 They say history is written by the winners, but the hit Fox drama Sleepy Hollow takes that a step further. The second season of Sleepy Hollow starts Sept. 22 and one of the things I'm looking forward to most is how the writers will continue to integrate American History into Sleepy Hollow along with both religion and supernatural legend. (Yes, I'm a nerd. Can you blame me? I started watching this show solely because it was created by two writers from Lost and "J.J. Abrams Presents: Star Trek."

The basic premise of Sleepy Hollow is that Washington Irving's character Ichabod Crane, who time-traveled to present day Sleepy Hollow, was a soldier in a Revolutionary War that included demons, witches, and who knows what else. It's done so in a way that you see how history could have seen the spooky stuff covered up and instead, allowed itself to become the lamestream dribble we're taught today. How fun is that? And clearly, there's more on the way when Sleepy Hollow returns for Season 2. Thomas Paine the Vampire? Betsy Ross as some kind of gender-bent Rumplestiltskin? Privateers with Selkie Wives? Anything could happen in Sleepy Hollow.

But how much of Sleepy Hollow is mired in actual history? Let's look back at some of Season 1's best historical moments and see what they got right and what came straight from the land of imagination:

The Lost Colony of Roanoke

Sleepy Hollow's take: In the fifth episode of the first season “John Doe,” a boy speaking Middle English is found with a mysterious illness. After the boy is quarantined like E.T., Icabod and Abbie discover the original colony of Roanoke that had been sucked into a portal, causing its mysterious disappearance. They learn that the boy has a disease given to him by the Horseman and has been ejected from the colony to spread it to Icabod and his people.

What really happened: No one actually knows. As the show explains, the citizens of the original Roanoke went missing. That part is true. The colony was established so that Sir Walter Raleigh could claim his chartered “right” to the land. The first English-born American child Virginia Dare was born there, but by the time Raleigh returned with more settlers, the colony was a ghost town. Of course, it wasn't abandoned in a supernatural way… as far as we know.

All that remained was a tree with the word “Cro” carved on it and “Croatan” carved into a fence nearby. The explanations vary. They could have starved. They could have tried to sail back to England and died at sea. They could even have integrated themselves with the neighboring Indian Tribes. Scientists and researchers are still trying to figure out the specific cause of their disappearance. The Lost Colony site is located in North Carolina and I like to think that this episode was a tribute to that area, where Sleepy Hollow is largely filmed.

Sleepy Hollow's take: "The Midnight Ride" opens with... just that. Paul Revere and a group of patriots are chased by the villain Death. Which makes sense because... they all ride horses. It would appear that they are warning citizens to the arrival of the Horsemen. Revere is the sole survivor. Later in the episode, Crane sasses a tour guide, insisting that Paul Revere never made it to Concord.

What really happened: Most folks know this story thanks to Henry Wadsworth Longfellow's poetic account. Paul Revere was a silversmith who, in April of 1775, became infamous for army intelligence by alerting the Colonial troops that the British army was approaching. The bit in the clip about "the Regulars" is accurate, though they were not referring to monsters. As Ichabod notes in the episode, "we were all British." Revere had developed a system of lanterns to send messages, and warned citizens as he rode through Massachusetts. This resulted in the Battles of Lexington and Concord. Also, Ichabod was right! Only Samuel Prescott made it to Concord. What gives, Longfellow?

Destruction of the Tea

Sleepy Hollow's take: Episode 4 "The Lesser Key of Solomon" opened with another familiar scene to all American History students: the Boston Tea Party. In the Sleepy Hollow universe, this event was contrived by Ichabod and his demon-hunting revolutionary pals as a cover for their covert mission to steal a chest that would "turn the tide of the Revolutionary War."

What really happened: Some punks (the Sons of Liberty) tossed tea into the Boston Harbor in protest of the British Government and the Governor of Massachusetts, who was holding out against the patriots' demands to let the ships return to England without unloading or paying for the tea. In an early act of cultural appropriation, the protesters "disguised" themselves as American Indians. Maybe not the most mature choice, but still remembered today nonetheless. No ulterior motive, just a good old-fashioned tea dump. This went down in 1773, still years before the Revolutionary War began. There must be some psychics in the Sleepy Hollow 'verse as well. Of course, Ichabod could just be speaking in an historical tense.

Even if it's not a major plot line, Ichabod is always good for a few bits of "trivia," whether he's cracking wise about Jefferson or casually mentioning that Adams was punny and Benjamin Franklin had a taste for "unsavory limericks." Not to mention Washington's Bible. On Sleepy Hollow, the book contains all kinds of secrets and magic. In actuality, one of the only things we know about Washington's Inaugural Bible is that he kissed it.

So maybe just take Sleepy Hollow's revised history with an avalanche of salt.