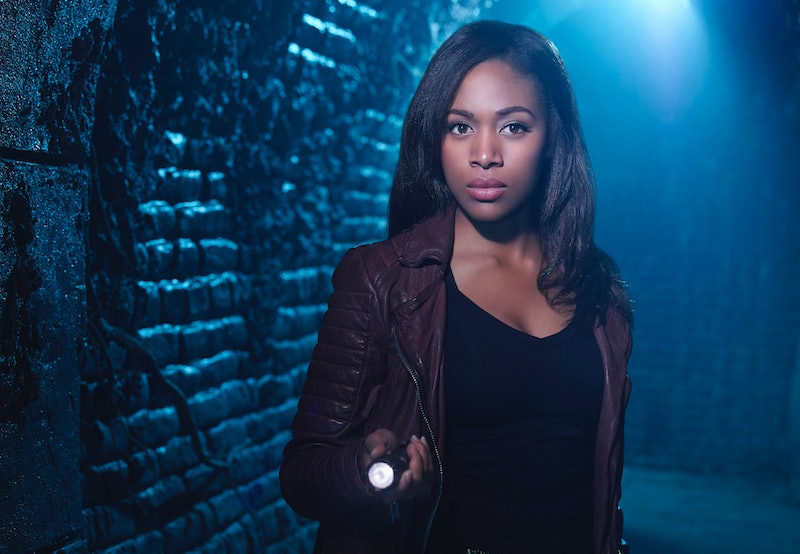 Sleepy Hollow is one of those shows that I tend to get a bit aggressive about. I want more people to watch it. Why aren't you watching it? There are demons and monsters and American history and friends solving mysteries together. There are silly jokes about what it really means to be out of time. It is unabashedly campy and has fun with wacky scenarios in a refreshing way. What more could you want? Sleepy Hollow returns for Season 2 Monday night, and you're wise, you'll do yourself a favor and check it out.

Still, there is an entire season worth of new demonic terms to learn, supernatural rules to suss out, and twists and turns to get straight. It's something of an undertaking and it's a lot of information to remember — even for those of us who were along for the Season 1 ride. If you don't have time to binge watch the first thirteen episodes and get a handle on the ridiculous amount of ground covered by the dashing Ichabod Crane (Tim Mison) and the savvy Detective Abbie Mills (Nicole Beharie), never fear. I'll tell you everything you need to know before the new season starts right where we left off.

Ichabod Crane was a revolutionary soldier, not the bashful protagonist from the Washington Irving story we all know. After beheading a demon he had been tasked by George Washington to kill, Ichabod died. But there was some good news: He was enchanted and awoke, alive again, in present day New York State. Yay! The bad news is that the Apocalypse is a comin'. It turns out the Headless Horseman is Death, one of the Four Horsemen of the Apocalypse. They have been summoned by Moloch to, you know, end the world. Ichabod is here to help. Thank goodness.

When these sisters were younger, they saw the demon Moloch in the woods. When questioned by police about the traumatizing incident, Jenny told the truth and Abbie lied. Years later, Jenny is in an asylum holding onto a whole lot of anger towards her sister for lying; Abbie is on her way to the FBI and she's carrying a ton of guilt. Eventually, with the help of Ichabod and the evidence proving that Abbie and Jenny really saw a demon that fateful day, the sisters repair their relationship and work together to fight the demons that literally haunted them as kids.

In the pilot episode, Abbie's mentor is killed by the Headless Horseman. The only person who believes her is the even less believable new guy in town — you guessed it: Ichabod Crane.

Abbie trusts Ichabod because he affirms her childhood traumas and visions. The two of them work together to fight demons and figure out how to stop Moloch and the Horsemen. She teaches him about modern living (coming from the 1700s makes Ichabod such a dad) and he fills her in on the secret demonic history of America (#important). They are a classic procedural partnership and while fans really, really want #Ichabbie to turn romantic, that aspect of their relationship is not actually the focus of the show, for once.

Keeping up with the Cranes

Icabod's wife, Katrina, is a witch stuck in purgatory. You know, average marriage issues. They occasionally have supernatural Skype dates (and by Skype, I mean "fever dreams") where she gives him messages and stuff. Katrina's been a witch for a good long while, but Ichabod only just learned that her coven was working to prevent the apocalypse the whole time he's known her. That's quite a secret to keep from your husband, eh?

They also have a son (played by Fringe's John Noble). Living under the alias Henry Parrish, Ichabod's son first shows up when Abbie needs to break Ichabod's connection to Death. Little do they know, Parrish is actually Jeremy Crane and one of the Horseman himself. And he's the worst one: War. He's a little miffed that he never knew his father, that his mom gave him away, and that a coven buried him alive because of his mystical abilities. Just miffed enough to bring about the Apocalypse. NBD.

And then there's the high stakes love triangle. No, I'm not talking about "Ichabbie." Not yet. Back in the olden days, Katrina was betrothed to a rude dude with the very attractive name Abraham Van Brunt. She preferred Ichabod and broke off the engagement. Abe was killed, sold his soul to Moloch, and set off on a revenge trip. He became... the Headless Horseman. How convenient.

The John Cho of it all

I will watch anything that John Cho is in. His Sleepy Hollow character Andy Dunn isn't on the show often. But boy does he leave his mark. He was a cop. He died. He came back. He's serving the horseman as a necromancer (kind of like a human puppet for evil). It's a whole thing.

Where we left off

I've noticed that we don't seem to be doing cliffhangers anymore. With the number of shows that get canceled every year, I understand the hesitation. You don't want to risk your season finale becoming your series finale and leaving everything undone. But I kind of miss that frustration of not knowing how the characters are going to "get out of it" and having to wait ages to find out.

Fortunately, Sleepy Hollow is some kind of television wunderkind and was renewed for a second season last fall — months earlier than most shows — and we got a whole handful of cliffhangers:

Really, though. How the hell are they getting out of this mess?