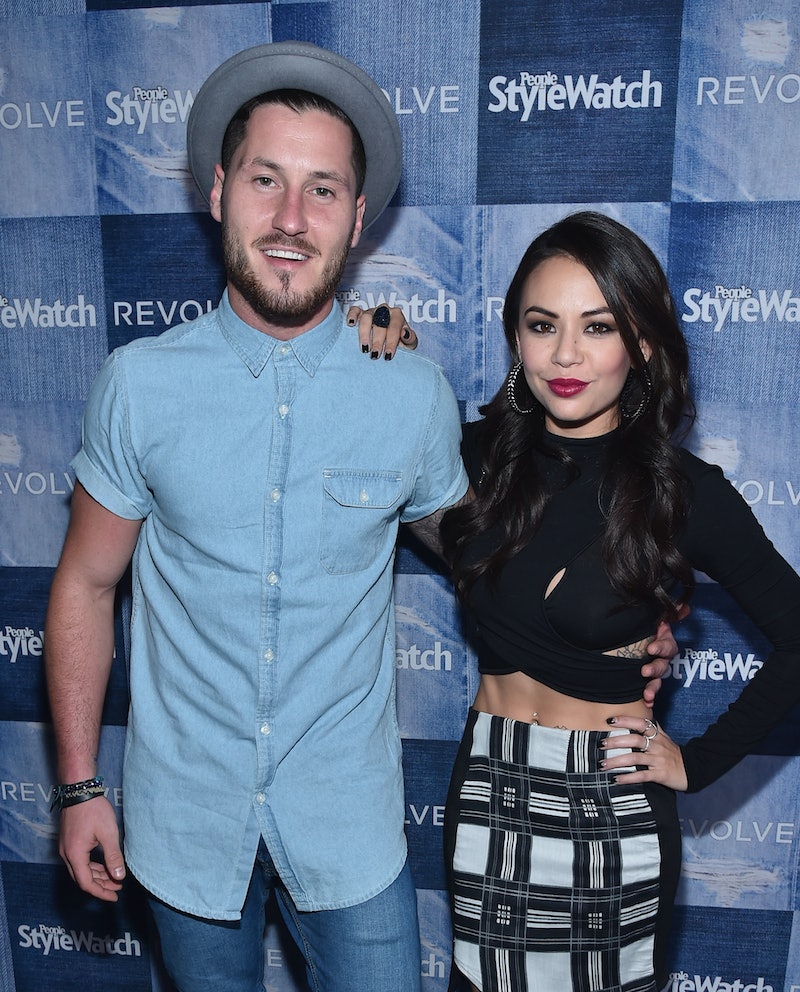 If you're a member of the human race, you know that Maksim Chmerkovskiy and Meryl Davis won Dancing With The Stars Season 18 partly because we fell in love with them obviously being in "love." And it was equally heartwarming when Maks left DWTS after last season because he didn't want to dance with anyone other than Meryl ever agin. He loved her and we loved them from the first minute they met and Maks "proposed" to the Olympic ice skater. Well, it looks like his brother, Val Chmerkovskiy and Janel Parrish are laying on the romance, trying to replicate Maksyl and their winning chemistry on Dancing With The Stars Season 19. And, yes, Val and Janel are pretty adorable — but I'm not entirely sure that they're sincere. Update: With almost the entire season behind us, I'm still not sure whether or not Janel & Val are faking it.

I know it's unfair to think that Val and Janel might be trying to win over DWTS fans with an embellished relationship to try to replicate Maksyl's winning season. (Even though that's totally something Janel's Pretty Little Liars character Mona would do.) But it just doesn't seem like they're naturally falling into their love. Which makes a lot sense because, according to J-14 and this Instagram, Janel has a boyfriend named Payson Lewis who's totally supportive of her DWTS run by the way.

So, to answer all of our questions about Val and Janel: they're totally faking it. But if Janel were single and it were possible that they actually could be falling in love à la Maksyl, here are five pieces of evidence that raise red flags:

Exhibit A: He Kissed Her On The Forehead After Their First Rehearsal

OK, I know this is a little less serious than when Maks proposed marriage at first sight, but, somehow, it just seems like way too much. A tender kiss on the forehead on someone that you just met today? It's just so intimate and something that Maksyl didn't do until later on in their "courtship." Just pump the breaks a little, Val.

Exhibit B: Their Team Name

These two were campaigning for a team name before DWTS even started. Now that's trying too hard, considering Maksyl came organically after we'd all fallen in love with them.

Remember how difficult it was to find Instagram-proof that Maksyl were totally in love and together? Well, Val and Janel's Instagram accounts are already full of photos of them together and attending events together and being adorable together. And when I say full, I mean that Janel has over 20 photos and videos with Val already posted. WE'RE ONLY ON WEEK 2, PEOPLE.

Exhibit D: They're Moving So Fast

Val's already met Janel's mother (OK, fine, she came in to a rehearsal, but still that's huge). And, again, it's only Week 2 of DWTS Season 19. These two have been joined at the hip since the announcement that they'd be partners. Just too much.

We all know now that, apparently, braiding is Val's signature seduction move. (Remember when he tried to use it on Meryl when there was a partner-swap last season?) Rookie mistake recycling your moves, Val, because we see right through them.

So, the verdict is obviously that Janel and Val aren't dating because she has a boyfriend. But we shouldn't have assumed that, even if they're faking it, they'd ever get together because this girl really doesn't need Val to win the judges over.