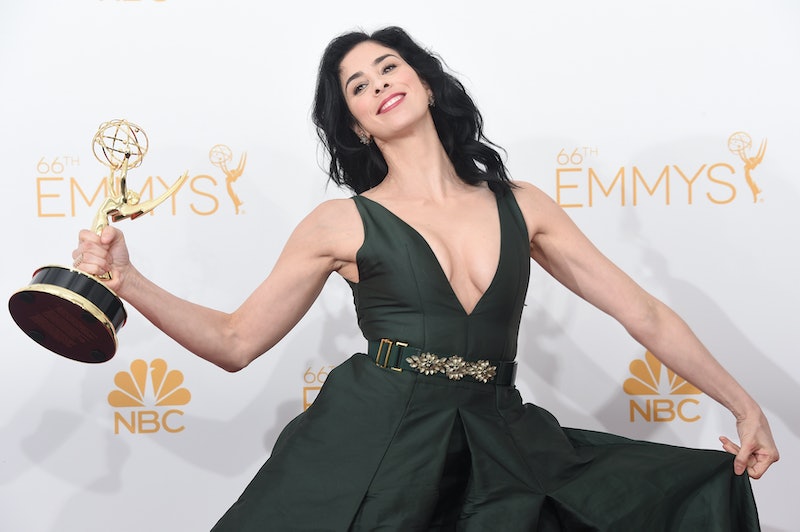 Comedian Sarah Silverman was the most recent target for the tabloids' slow news cycle. After Star magazine ran an insensitive, assumptive headline called "Sarah Wants a Ring" which claimed that the actress has been hankering real bad for an engagement ring from her current boyfriend Michael Sheen, Sarah Silverman expressed her outrage at the marriage rumors via Twitter. Now, as Silverman explained, she normally wouldn't go to such measures to respond to a tabloid, yet she saw this particular article as an attack on her as a Jewish woman with the tabloid to stereotyping her by saying she would be after a ring. In her words, "yich."

According to Star, Silverman’s been leaving pictures of engagement rings all over the place for her Masters of Sex beau to stumble upon, because that is a completely believable, not-so-subtle-hint. It obviously sounds like something Sarah Silverman, a vocal nuptial naysayer, would do. Not. First, that sounds slightly insane. Second, that’s just uncreative. If a rag were to accuse me of chasing marriage, they might as well say I hired a sky writer or rented out a billboard in Times Square. If we’re making up stories, might as well go all out.

Unsurprisingly, Silverman responded with brutal honesty, calling out the Star for being bigots.

Was that a step too far? Calling the publication bigoted is a pretty big accusation. Silverman believes the magazine's story is tied to her Jewish heritage, and while we can't know for sure if there's a link there, the article did portray her as a desperate woman — which, of course, is not OK by any means either. Could it be that Silverman was a target for the story because she's spoken out about her beliefs when it comes to marriage before? Silverman spoke to Playboy in 2010 saying,

I’m not against marriage, but it’s just not for me. I’m a vegetarian, but I don’t have a problem if you want a hamburger. Marriage to me is like eating meat. I think it’s gross and [bleep]ing crazy.”

It's a case of chauvinism. Tabloids churn vaguely believable celebrity gossip out of nothing, so of course they just had to do it about a woman hungry for marriage, despite having been so frankly against it before. And as I see it, it's just lazy filler.