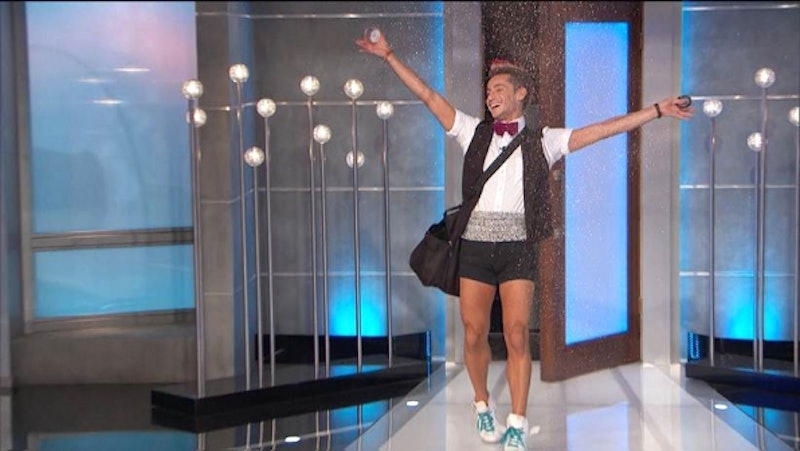 Season 16 of Big Brother has been quite a wild ride. Well, wild ride might be the wrong word for it. I mean, if you ask me, Big Brother season 16 was really boring since pretty much everything happened the way that we thought that it would happen. However, the season is also coming to an end on Wednesday and between now and then is the time to vote for America's Favorite Houseguest. CBS has done a good job of encouraging people to vote for who deserves to win money for being the best house guest all season, but some of the house guests have a certain advantage over others. I am talking, of course, about Frankie Grande whose sister Ariana Grande promoted him on Twitter.

Frankie is the only one of the house guests who was fairly well known prior to appearing on Big Brother and that could work to his advantage to win him the title of America's Favorite Houseguest. Certainly I thought this would happen earlier in the season. However, Frankie has done and said so many things to bring him negative press that I'm not sure he deserves the title anymore. Should Frankie be awarded the title and win the money that comes along with that honor? Let's think about this.

YES: He made this season interesting.

In terms of sheer shenanigans and fun situations, Frankie and Zach were the two top house guests who tended to make everything ten times more interesting just by being involved. The most talked about moments from the season either came from Frankie or involved Frankie in some way, like when he manipulated Zach into that series of Zach Attacks for the Team America missions. Thanks to Frankie, this season was less boring than it could have been.

NO: He turned into the villain.

However, during the second half of the season, Frankie morphed from genuinely entertaining into kind of a total menace. If he's not making rape jokes and saying someone should kill themselves, he's betraying Zach and constantly talking himself up. And the part where he said he didn't care if America hated him because superstars are hated? Ugh. Ugh. Are we really going to give a guy like that the title of America's Favorite Houseguest? He already said he doesn't care what we think.

YES: He gave us the best showmance.

Hayden and Nicole's "Haycole" showmance is still the cutest, but Zach and Frankie are the showmance that keeps on giving. The whole reason Zach constantly has to remind us of his heterosexuality is because he and Frankie got unbelievably close in the Big Brother house, between all the cuddling and the love declarations and the wearing matching outfits. If not for Frankie, Zach might have ended up this season's villain and held up to the way he originally portrayed himself in his introduction video. Thank goodness we'll never know.

NO: He got rid of the other fan favorites.

The strongest contenders for fan favorite at this moment are Zach and Donny. Who got rid of both of these people? Frankie. Frankie had the chance to save Donny from being on the block and purposefully turned his back on Donny to put on a play for the house guests instead. And don't even get me started on the number of times he tried to get Zach sent home before it finally happened. It still hurts my heart.

YES: Most of us started watching for him.

Even if you're a Big Brother superfan, there's no denying that the fact that Ariana Grande's brother would be on season 16 was a huge lure for a lot of people and news outlets. All the other house guests were relative unknowns, but Frankie came in with a built in fan base that contributed to the show's ratings.

NO: He tried to use that to his advantage many times.

Remember when Frankie told people he would follow them back on Twitter if they voted yes to his Team America mission play? Remember when Frankie pretty much tried to use his social media sway to get his way in the competition? Big Brother is meant to cut yourself off from the outside world and play an honestly dishonest game and Frankie hasn't been doing that at all. We shouldn't reward him for trying to use his sway like that.

YES: He left with grace and sparkles.

The only exit that topped Frankie's was when Zach started showing fruit loops down on everyone. When Frankie walked out of that Big Brother house to loud applause, he threw sparkles all over himself. He even wished the other house guests good luck with the competition. It was a far cry from when Christine walked out without looking at or hugging anyone.

NO: He tried to threaten the house guests beforehand.

Except Frankie had already gotten his anger out earlier by telling Caleb, Derrick, and Cody that if they sent him to the jury house then he would control all the players and the votes when he got there. Because he's such a powerful player and everyone listens to him an blah blah blah. Yeah, okay, Frankie. Okay.

From the start, Frankie was the kind of guy who got along with everyone. Even if he betrayed someone, they either never found out or were incapable of staying angry with him about it. (Ahem, Zach.) Frankie knew who to talk to and had perfect luck with what room to be in to make sure things kind of went his way. At least, for a while.

NO: He's no Derrick.

However, the person with the best social game is actually Derrick, not Frankie. Derrick went through the whole season without being put on the block even once and he had all three other house guests in the Final Four convinced he had their backs to the end. If we're voting based on who played the best game, it's Derrick all the way.

I mean, just speaking as a fan of Ariana Grande, I feel like it's some kind of blasphemy not to vote for her brother. She already asked her fans to vote for him. How can we Arianators deny our queen?

However, the sheer amount of times Frankie used the fact that he was Ariana Grande's brother for sway after revealing himself to the house guests makes that the worst reason to vote for him for everything. We're not talking about who he's related to. We're talking about him as a player. Before you vote, it's worth it to consider whether or not Frankie really deserves the money more than someone else.