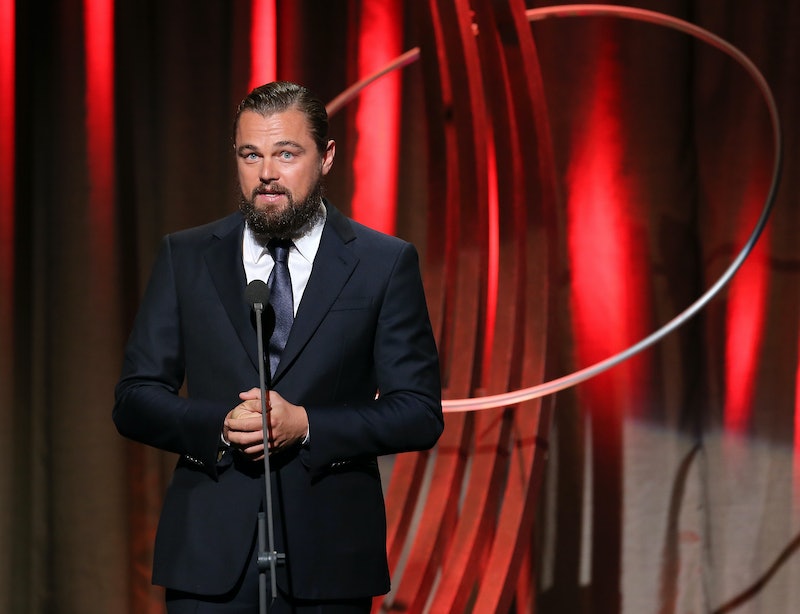 Our favorite Oscar-less actor just won an award and it means a whole lot more than any Oscar ever could. That's right, Leonardo DiCaprio received a Clinton Global Citizen Award on Sunday night for his environmental protection work. It's a cause the actor finds so important that he's dedicated his entire Twitter page to talking about how we can all save the climate.

But DiCaprio's efforts go beyond just what he can do on social media. On Sunday he also attended the People's Climate March in New York City with fellow actors Mark Ruffalo, Evangeline Lilly, and more to raise awareness about the climate dangers like fracking and the Keystone XL pipeline. But as Bustle's Caitlyn Callegari points out: "They weren’t just bystanders, though. The actors were quite literally right in the middle of all the action, holding signs and talking about why it mattered to them."

This effort to protect the environment is what got DiCaprio recognized by the Clinton Global Initiative in the first place. He was presented the award by World Wildlife Fund CEO Carter Roberts who introduced the actor saying: "Now more than ever nature needs a voice. Leonardo DiCaprio is that voice." Even the United Nations agrees, having recently appointed him the UN Peace Messenger.

During his Clinton Global Citizen Awards acceptance speech, DiCaprio put that title to good use, taking the time to address the problems our planet faces. He called attention to how important it is "to put environmental issues at the forefront of the human agenda ... [as] less than 3 percent of all philanthropic giving goes toward protecting and preserving our environment."

His speech was an impassioned call to action as he spoke eloquently about the vital need to protect the planet.

By protecting our oceans and our wild lands we allow species to recover, local communities to thrive and ultimately maintain a stable climate for all life on Earth ... The world is now at a turning point, and climate change is the defining issue of our time.… The task before us to protect this planet will require the largest movement in human history. It will have to cross all cultural, religious and political boundaries. But the good news is the solutions are ready, and with leaders like the ones in this room who do not shrink in the face of crisis. They can rise, they can inspire and they can contribute. And that truly is the best hope of planet Earth.

It's true that DiCaprio may not have an Academy Award, but that doesn't matter in the grand scheme of things. Seth Meyers put it best when he compared hosting the two awards ceremonies, saying, "I gotta tell you, it's quite a change to be honoring people who actually do good things instead of people who play meth cooks on television."

DiCaprio is effecting real change on our planet, and that likely means more to him than a golden Oscar any day.