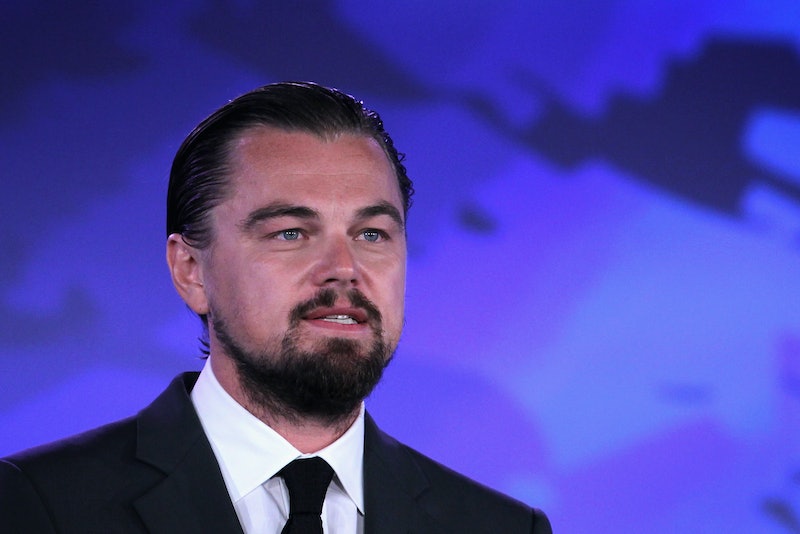 The through line from the entertainment world to the world of politics and world issues is amongst the weirdest in our culture: Actors become governors and presidents, we (or at least headlines) look to performers for advice on everything to whether to vaccinate our children to how to react to the Israel-Gaza conflict. It's all pretty messy and pretty questionable. But sometimes it can be relatively simple: A celebrity invests their time, money, and public image into doing actual good in the world, and eventually they're given swanky titles. For an example of this, witness Leonardo DiCaprio, UN Peace Messenger.

That's right, DiCaprio is now an official Peace Messenger for the UN, working with them to promote "global action on climate change." This goes along with DiCaprio's longstanding work in relation to the environment, which extends back years and most recently can be seen in his pledge to help save the oceans. George Clooney's also a UN Messenger for Peace, and Emma Watson was appointed as a goodwill ambassador for UN Women in early July.

DiCaprio's work on environmental advocacy ranges far and wide, but you can witness a little bit of it in Carbon , a documentary he narrates. You can watch it below:

More like this
Taylor Swift, Kerry Washington & More Speak Out On Uvalde Mass Shooting
By Jake Viswanath
Rebekah Vardy & Coleen Rooney’s Trial Has Officially Begun
By Bustle UK
Britney Spears Thanks Fans After Miscarriage & Explains Why She's Writing A Book
By Jake Viswanath
Shocked Fans & Former Co-Stars React To Ray Liotta’s Death At 67
By Grace Wehniainen
Get Even More From Bustle — Sign Up For The Newsletter