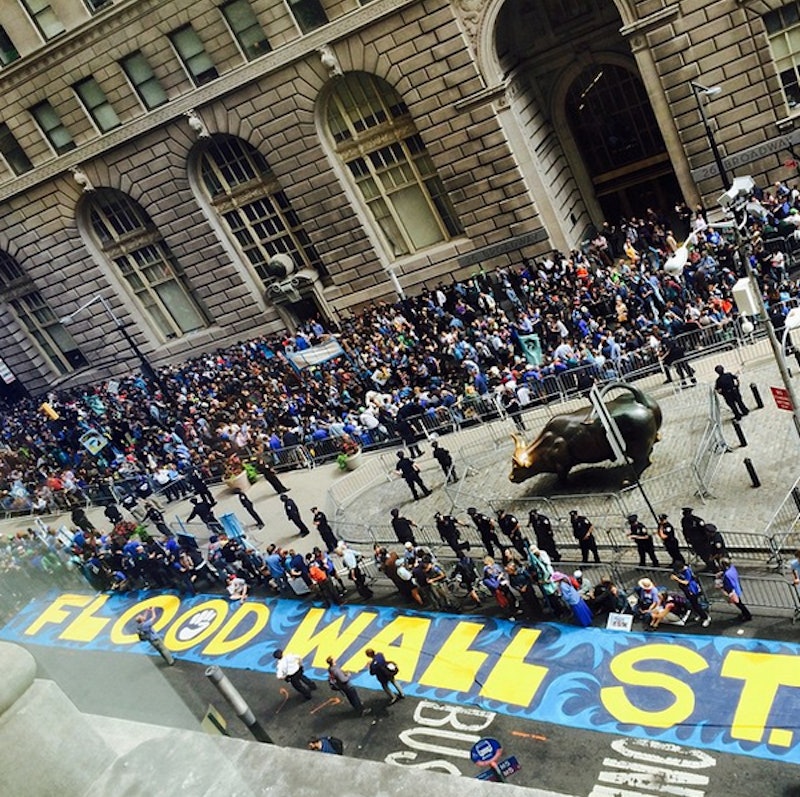 On Sunday, cities across the globe participated in the People's Climate March, which demanded action be taking against the world's ever-warming temperatures. On Tuesday, President Obama will join more than 100 world leaders at the UN Climate Change summit, and Monday saw climate activists "Flood Wall Street" in a symbolic gesture — one more militant than Sunday's 400,000-person strong march.

The NYPD confirmed to BuzzFeed that two protesters had been arrested, amid reports that cops on the scene attempted to pepper-spray the crowd. The 1,000-plus protesters carried blue signs in an effort to "flood" downtown Manhattan in a sea of blue — a representation of rising water levels.

According to the march's official schedule, the call to action began at 9 a.m., with activists meeting Sunday in Brooklyn to prepare. The official Flood Wall Street website lays out its thesis:

On Monday, September 22nd at 9:00 am, thousands of people will gather at Battery Park in Lower Manhattan to confront the root cause of the climate crisis – an economic system based on exploiting frontline communities, workers and natural resources. On the heels of the largest-ever march on climate change, we have an opportunity to transform the economic system driving this crisis.

Wearing blue to represent the sea that surrounds us, we rise to the steps of the NY Stock Exchange at 12:00 pm, flooding the area with our bodies in a massive sit-in – a collective act of nonviolent civil disobedience – to confront the system that both causes and profits from the crisis that is threatening humanity.

Though the protest was separate from the People's Climate March, it had the same goal: Take specific, collective, united steps to deal with the rapidly heating earth.

We've just seen the hottest summer on record and the West Antarctica ice sheet begin to collapse, but if there ever was a sign that we're waking up to the reality of global warming, here it is: Even the GOP is struggling to maintain the fiction that climate change is nonexistent. Over in Virginia, for example, the state Republican party has officially given up trying deny it exists, and is actually working alongside state Democrats — yup, you read that right — to figure out what the hell to do next.

Flood Wall Street isn't willing to wait to find out.