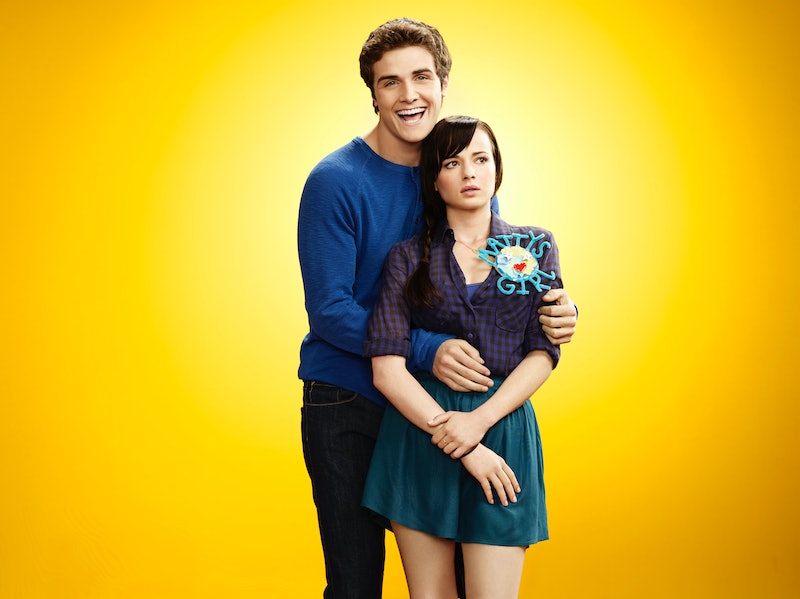 Jenna Hamilton and Matty McKibben are the big unanswered question going into the Awkward mid-Season 4 premiere. Will Jenna & Matty get back together? Is Jatty really over? Is Matty really having a baby with Eva? According to the previews, the on-again-off-again couple has quite a moment where they have a definite make out session, but MTV could be deceiving us and getting our hopes up for a reconciliation that might never come. I think we will have to wait a little bit longer for a Jatty reunion, if Awkward's history is any indication.

Jenna and Matty have been apart for awhile now. They are about to graduate, which I can only assume will happen at the end of Season 5 (high school has to end some time, right?). They will take the rest of Season 4 and drag it to spring break, followed by the end of high school in the fifth, if past patterns are any good at predicting future ones. Clearly, Jenna and Matty are the series' endgame, but it doesn’t seem realistic to have them get back together now and then again around the time of graduation.

All that considered, we can expect Jatty to be reunited next season, but I wouldn’t suggest getting your hopes up for the second half of Season 4. It'd be a little anticlimactic. Plus, there’s too much baby-daddy drama for them to get back together now.

And beyond all that, it would break the Ross & Rachel code established by Friends. In comedy shows that revolve around a central couple there are very clear steps that happen:

Season 1 establishes two people who are trying to get together, but they can’t because of some outside force. In this case, Matty keeps his relationship with Jenna a secret from the school because he’s embarrassed. This stops Jenna from being with him and sends her into a relationship with Jake.

STEP 2: The Other Romantic Partner

Just like How I Met Your Mother or Friends, there’s usually another person who comes along and gets in the way of the couple that’s supposed to be together (i.e. Ted Mosby's girlfriend Victoria or Ross' GF Julie). I’m aware that people were Team Jake during Season 2, but seriously, it was always supposed to be Jenna and Matty, so it’s time to move on from that fantasy.

Then after the couple in question finally gets together, they are happy for a little bit (of course they have to be). Something (more likely than not, another person) gets in the middle of that — ahem, Colin, who was the Awkward equivalent of Ross Gellar and the copy girl when "WE WERE ON A BREAK." Basically, something happens that changes the game and causes a breakup.

The rebound is usually someone random and they aren’t around for very long. For Matty that was Bailey in Season 3 (much like Robin's Gael on HIMYM).

Season 4 begins with a backslide. It always happens. Matty and Jenna start Season 4 as friends with benefits, followed by one of the characters getting into a serious relationship with someone who sucks… Eva (who is basically the Emily to Matty's Ross Gellar).

Matty and Jenna are following the same track that everyone else is, but it’s a high school show, which means it has a shorter life-span than a show that could go on for ten seasons. MTV will announce the end of Awkward soon enough (they can only drag out senior year for so long), and when we do reach the end of the road, we can be certain that Matty & Jenna will be happy again and together in the end. He's her lobster, after all.