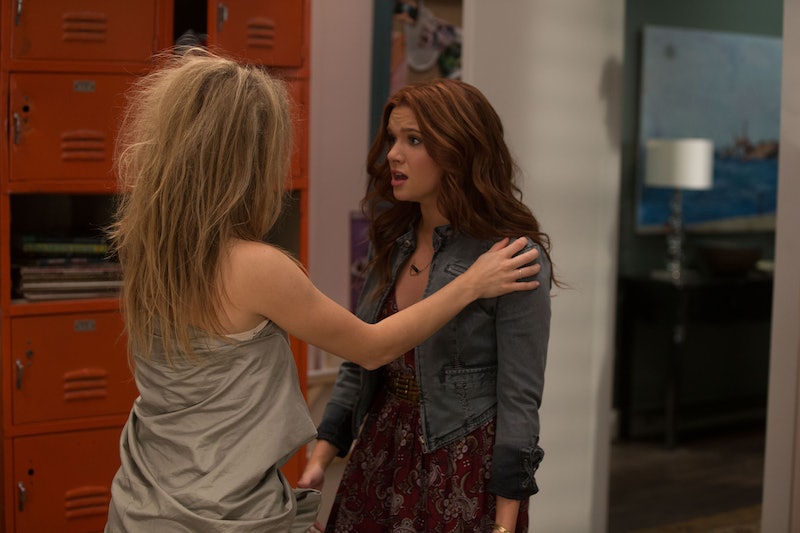 After what seemed like an endless hiatus — but in reality was only a couple of months — MTV's Faking It is finally returning for Season 2. On Tuesday, we get to catch up with Karma and Amy again, although if you remember where we left off, things aren't looking so good for my new favorite TV BFFs. After Amy revealed to Karma that her feelings for her are real, Karma told her she didn't feel the same way... and this, somehow, landed Amy directly into Liam's bed. How could she have possibly thought this was a good idea? Alcohol. Lots and lots of alcohol.

Don't get me wrong: Liam's cute. But is he worth risking a lifelong best friend over? Definitely not.

Depending on where MTV decides to go with this, Amy sleeping with Liam could end up being a pretty interesting plot twist. After all, the show might center on Karma and Amy's friendship, but Amy's self-discovery as she explores her sexuality is now pretty much at the forefront. There's something so awesome about watching a show where the characters are so human they make some pretty huge mistakes, and this is one of them. And whether or not Karma and Amy's bond can survive this really depends on how Karma finds out what happened. The way I see it, one of two things will happen.

Amy tells Karma the truth — herself

And yeah, Karma's going to be (understandably) pissed. But Amy's honesty is really important to eventually securing forgiveness in the future. Being lied to about something almost always hurts more than the actual thing you're being lied to about. I would love to see Amy confess what happened to Karma and see how that plays out from there. It's easy to forget that the show is about two 15-year-olds, and any girl who's ever been 15 can imagine how both of them are feeling right now. Amy needs her best friend, and I hope she gets to keep her.

Chances are that their friendship could come out the other side stronger than ever... or it could be destroyed forever. But it would be truly awesome if the show could give us two female characters who rise above a conflict where a boy is involved.

Karma finds out from someone else

Obviously, this outcome would be catastrophic... and there would be a lot more rebuilding involved when it comes to putting Karma and Amy's friendship back together. However, given that this is a TV show and TV shows like to bring the drama, I'm thinking this scenario is the most likely. Maybe Liam will let it slip to Brandon or someone else, and the news will work its way back to Karma. Maybe Lauren will get wind of what happened and broadcast it to the entire world to sabotage Amy. It's not going to be pretty.

Either way, I'm hoping that the whole Liam thing is put on the back burner for now. To me, there are a lot of more important issues at hand.