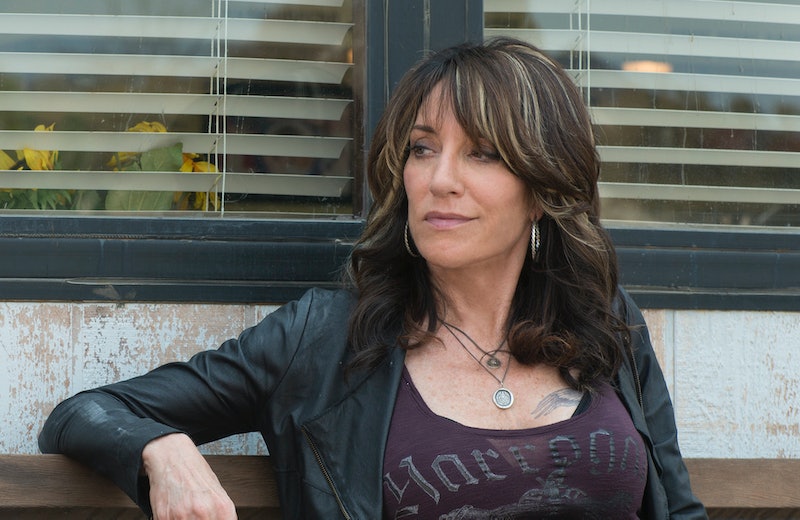 It's a little strange that with two whole episodes left in the series, we've seemingly reached the answer to Sons of Anarchy's second-biggest question: Will Jax kill Gemma for killing Tara? After Abel told Jax about the murder, it seemed an almost foregone conclusion: Jax would wrestle with the decision, and in all the wrestling, Gemma could likely end up dead. After all, every awful thing that Jax has done in Season 7 stems from Gemma's lies about the Chinese killing his wife. Every terrible problem could have been avoided if Gemma came clean about Tara. Jax and the club wouldn't be facing charges of killing Sons from another chapter if Gemma hadn't lied. She's the source of every problem. And yet, at the end of the Sons of Anarchy on Monday, "Suits of Woe" seemed to confirm that Jax doesn't have it in him to off his own mother.

To back up a bit, Jax gets confirmation early in the episode that Gemma killed Tara when he visits Juice (who has just carried out a false execution plan set in motion by Gemma's lies). Juice tells Jax everything, sending the SAMCRO leader into an emotional tailspin. He tries to keep from telling anyone the truth, but simply tries to hunt down his mother — who's doing her best to escape — until he contacts Nero and tells him everything. Nero is with Gemma and tells her she needs to leave, but doesn't confess her location to Jax. He's destroyed, but he can't condemn the woman he loves to death.

But what about Jax? How can I be sure he won't kill Gemma? Well, I can't be totally sure, but he seemed pretty resolute in his stance in Tuesday's final moments.

When he sits down with Nero to talk about what to do about Gemma, Nero points out that killing his own mother would create more pain than it would heal. He's right: Jax would never come back from that. But it doesn't seem that Jax is coming back from any of it. He says that even with all this knowledge of the bloodshed and wreckage she's caused, he still loves her. She's still his mother. It's hard to say how any of us would react in that situation, but I have to think this is it. Gemma has been present in his life; she's tried to take care of him; she's been his mother. Knowledge that she killed his wife and one great love isn't something that will make him turn his gun on her, it's something that will make him curl up into a tiny ball and cry pools of tears into Nero's lap (Nero, of all people).

So while something may change the course in these next two episodes, my bet is that rather than Jax trying to kill his own mother — who has just escaped to Mexico — he will use the irreversible damage this truth has done to his heart and his mind to misguide him into a grisly end. After all, Jax's death is what SoA practically promised from day one of this season.