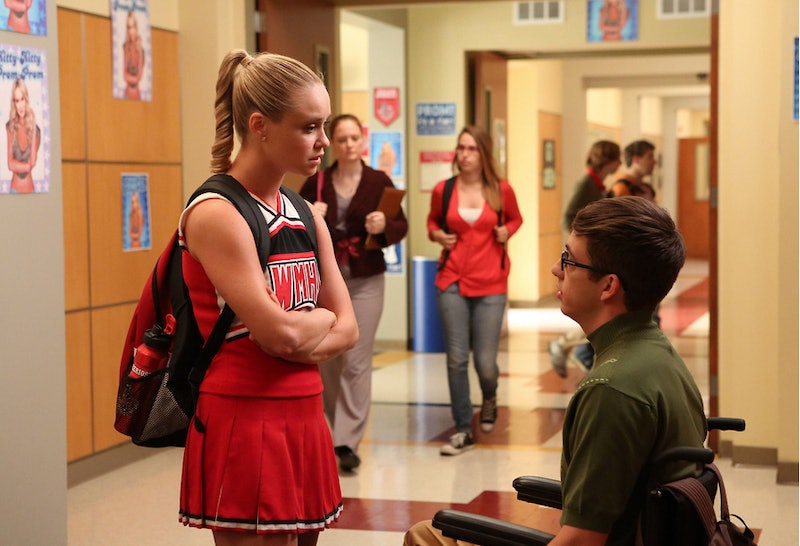 Praise the Glee gods, because fans will finally find out what happened to our favorite blonde, bitchy cheerleader. No, I'm not talking about Quinn Fabray — even though I'm pretty happy that Dianna Agron will return for Glee Season 6 along with most of the series original cast. I'm talking about our other favorite blonde, the one who was essentially the best part about Glee Season 5 until Ryan Murphy took her, unceremoniously, away from us: Becca Tobin's Kitty Wilde. According to recent spoilers from MJsBigBlog, Kitty returns to Glee Season 6 in Episode 2 "Homecoming." This is great news because I definitely wasn't the only fan left wondering what happened to Kitty after Glee 's 100th episode.

According to the popular spoiler blog, Kitty's the new head cheerleader at McKinley (naturally) and she's bitter about about how Artie left things off with her after the 100th episode and graduation. (We feel you, girl, because that was SO uncool — I'm looking at you, Ryan Murphy.) And she's also not so keen to help out the former glee club members in recruiting new students to join Rachel's new club, mostly because of Artie but also because of how they treated her back in Season 4. (Which was kind of deserved, but OK.) The most important things here, though, are that KITTY IS BACK and whether or not she and Artie will decide to give things another shot.

And, to the latter, I say absolutely not. Glee fans don't necessarily know what happened between Artie and Kitty or if anything happened at all, but when you take into consideration the fact that she's bitter, you can probably guess how this went down. The show just kind of dropped Kitty after graduation and it really sucked because it was with Kitty's help that Artie even decided to go to college in the first place. Glee didn't even give the character the service of having an onscreen conversation with Artie about where their relationship would go once he left Lima and whether or not they were breaking up. It was just a huge disservice to Kitty, who'd grown on me so much in Season 5, to toss her out with the rest of the Lima storyline and have Artie move on to becoming a "player" in college. (I still don't get that whole storyline, but OK. Wear condoms, kids.) On the lack of closure alone, I'm completely against this 'ship rekindling its flame, but there are even better reasons.

Artie might be coming back to Lima for "Homecoming," but that doesn't mean he's staying there. Spoilers for the episode DON'T say anything about Artie quitting college and coming back to join Rachel, Kurt, and Blaine as a Lima Loser. So, starting a relationship with Kitty back up while he's home for the weekend just wouldn't be cool on any level. Artie clearly can't handle keeping in touch while he's away at school — if he could, maybe he and Kitty wouldn't have broken up in the first place. And Kitty's way too smart to make that same mistake twice.

Artie Is So Yesterday

There's also the fact that, while Kitty might be bitter about seeing Artie and having him ask her for help, she's probably moved on by now. And she should stay that way. There's been a ridiculous amount of time between when she and Artie broke things off and his return, so what's really the point of going back? Especially since it's obvious, with Kurt and Blaine's break-up, that McKinley high school sweethearts don't exactly make it. I'm 100 percent certain that Kitty's not upset because she needs Artie in her life; she's just pissed that he didn't give her the courtesy of a civilized, respectful break-up that she deserved. Why would she give Artie a second chance to hurt her like that when he clearly didn't understand how much she was worth in the first place? She wouldn't.

But really, who even cares about this Artie drama? All I really care about is that Kitty is back.