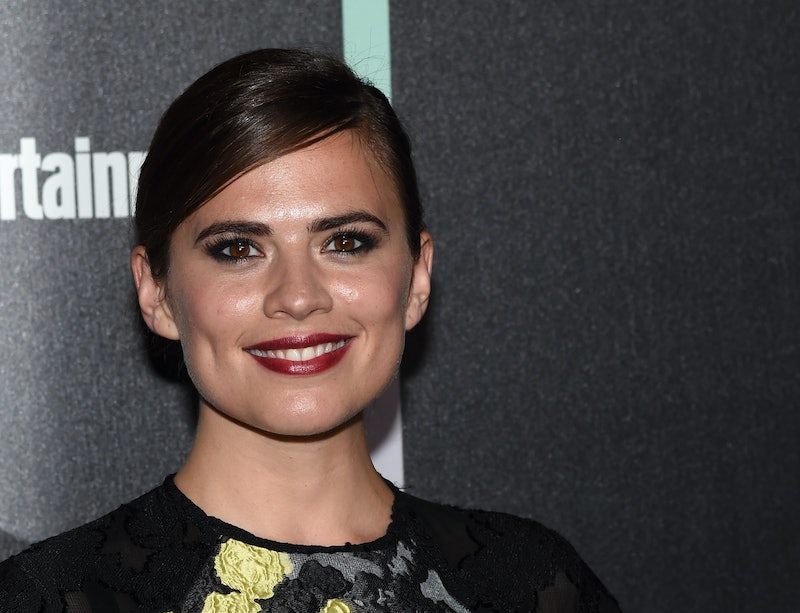 ABC's Marvel's Agents Of S.H.I.E.L.D. may be the Marvel Cinematic Universe's first foray into television, but it certainly won't be its last. The über-successful comic book giant is also set to debut another of its characters on the small screen — Agent Peggy Carter, Steve Roger's ally in life and love from 2011's Captain America: The First Avenger. In the upcoming ABC series Agent Carter , British actress Hayley Atwell will reprise the character that managed to transcend a potentially one-note role with her spunk and strength, turning Carter from a potential footnote into a fan-favorite.

She's the perfect character on which to hinge a new series. Like the titular group at the heart of S.H.I.E.L.D., Carter has no special abilities with which to fight the super-powered threats facing our world. But her history as co-founder of S.H.I.E.L.D. (with Howard Stark) makes her central to the other show's history, and puts her right at the heart of the conflict with the insidious Hydra So when do we finally get to see Agent Carter in action?

Carter will first appear on television, not in her own show, but in the season premiere of S.H.I.E.L.D., titled "Shadows." Atwell is slated to guest star in the episode, although her appearance — whether in a flashback to her younger days, or as the older present-day version seen in Captain America: The Winter Soldier — is being kept very much under wraps.

But when does Marvel's Agent Carter actually premiere in all its glory? Sadly, we'll have to wait until January 2015 to see Atwell kick Nazi butt. Her series will span the midseason break of S.H.I.E.L.D. So instead of airing re-runs while that show is on its winter hiatus, ABC will be able to offer viewers exciting new material. That's both good news and a little bit of bad news, since it means that we might not ever see a Season 2 of Carter.

What do we know about Marvel's Agent Carter so far? First of all, it will feature One Tree Hill star Chad Michael Murray's return to television as Agent Jack Thompson. It will also star Joss Whedon alum Enver Gjokaj (Dollhouse) as Agent Daniel Sousa and Boardwalk Empire 's Shea Whigham (Eli Thompson) as Chief Roger Dooley. The show will take place in 1946 and focus on Carter, who "finds herself marginalized when the men return home from fighting abroad. Working for the covert SSR (Strategic Scientific Reserve), Peggy must balance doing administrative work and going on secret missions for Howard Stark all while trying to navigate life as a single woman in America, in the wake of losing the love of her life–Steve Rogers."

At least it seems like ABC has learned its lesson from its botched trip down the rabbit hole last season. Once Upon A Time In Wonderland was conceived in a similar fashion, as a limited-run event to span the winter hiatus of Once Upon A Time.... but then the network execs got too ambitious and tried to make it a full-fledged series, running concurrently with its parent show. Needless to say, Wonderland was a flop (although cast member Michael Socha, aka the Knave Of Hearts, is joining OUAT as a series regular in Season 4). Thankfully, ABC is sticking to its plan with Agent Carter, so hopefully fans will remember it more fondly than that fumbled spinoff.