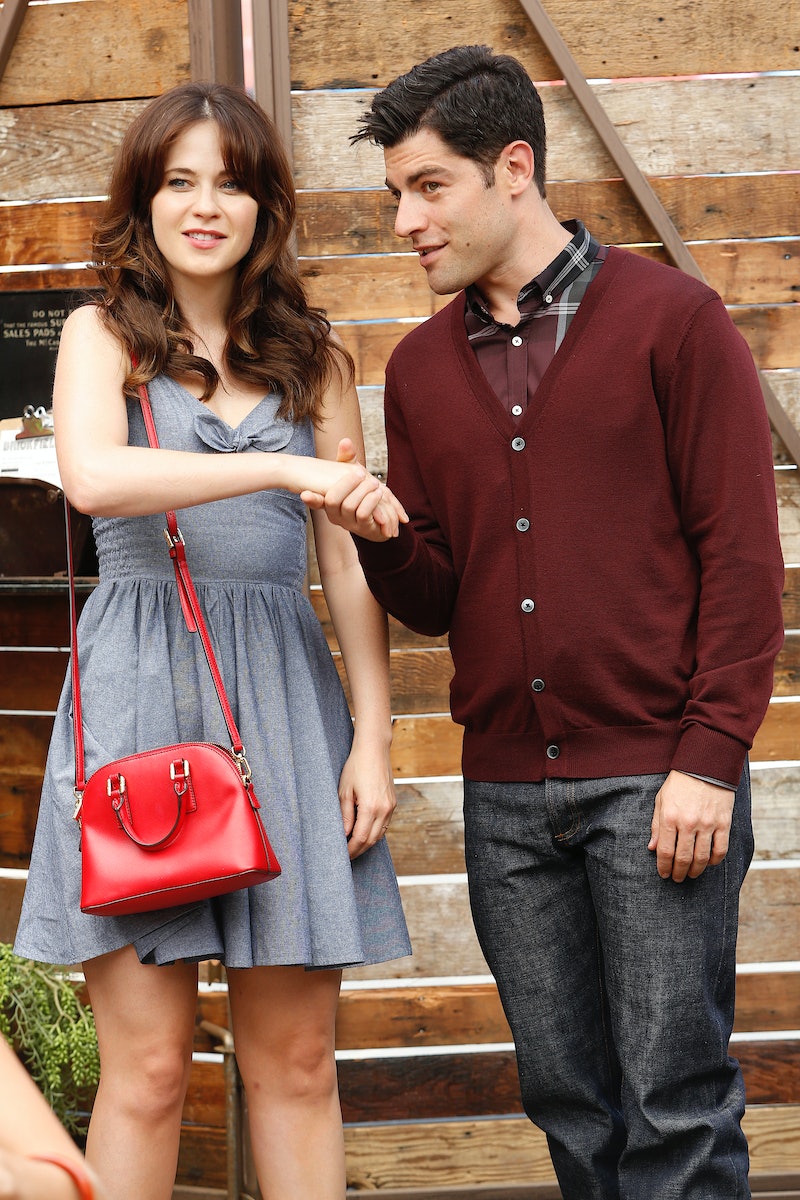 There are many things I love about New Girl — the witty dialogue, the comical hijinks, the mere presence of Nick Miller — but what I most enjoy about the series is the way every single one of its character seems to gel so well with one another. And just like how New Girl 's Season 4 premiere reminded us all of how amazing Schmidt and Nick's bromance is, this week's episode "Dice" focused on the Jess and Schmidt dynamic, which proved to be equal parts hilarious and heartwarming. Thanks to the loft's very thin walls, Jess can't help but notice how frequently Schmidt keeps bringing home late night visitors, prompting her to ask her flatmate for a little dating advice.

It's here that Schmidt introduces Jess to a dating app he's been using called "Dice," which allows its participants to look at photos of each other and simply swipe up or down if they're interested in meeting up. (Because that sounds super safe.) It's all about split-second decision making, something Schmidt doesn't think Jess is ready for. But naturally, she doesn't listen, thinking she can totally handle separating the duds from the dreamboats… except that she totally can't. That's where Schmidt comes in. Using a Taboo buzzer, Schmidt lays out the Dice dating guidelines for his doe-eyed apprentice, who (according to him) needs more work than Kings of Leon. LOL.

To help speed up the process, Schmidt invokes what he calls "Dice Diez," where he sets Jess up on 10 dates (hence the "Diez" part of the title), allowing her to get the hang of how the site works. And since these two are basically polar opposites of each other, especially when it comes to dating, the result is pure comedy magic. Between his one-liners and her gullible nature, it makes you wonder why it's been so long since these two had some decent screen time together. (More please!)

However, it isn't until near the end of the episode that we see their friendship at its very core. Jess is still having a hard time showing some of these losers the door, but Schmidt assures her that she's the best girl on that website, even referring to her as the "last piece of pie" (which any pie lover knows is the best piece). She deserves better than what these guys can give her, and to see Schmidt remind her of that fact is one of the most genuinely decent things we've ever seen him do. Is it time to start taking money out of the douchebag jar? That could very well be the case.

So even though every single one of Jess' dates turned out to be an epic failure, at the very least "Dice" gave fans a full half-hour of pure laughter and proved that Jess and Schmidt's friendship is anything but dicey.

More like this
What’s New On Netflix: Ana De Armas’ 'Blonde' & A Nick Kroll Special
By Arya Roshanian
Rosa Salazar Leads A New Morbid Wedding Dramedy From Disney+
By Darshita Goyal
What’s New On Netflix: Meet 'The Real Bling Ring'
By Arya Roshanian
Here’s Everything Coming To & Leaving Netflix In October
By Jake Viswanath
Get Even More From Bustle — Sign Up For The Newsletter