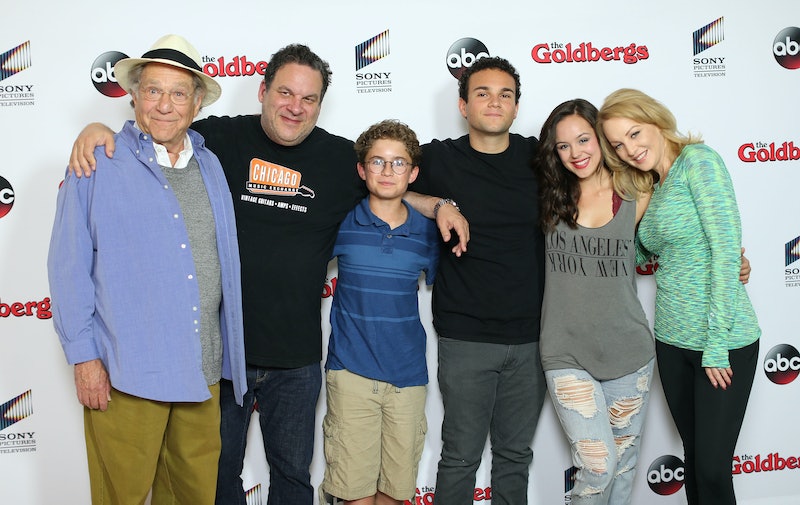 Nostalgia's pretty big right now, if you didn't already know. While I don't think we're ready to revisit the 90s just yet, we are certainly prepared to take a trip back to the 80s. The Goldbergs Season 2 will undoubtedly include just as many Bon Jovi references, big hair, and off the shoulder shirts as the first one. If you're ready to jump right into Season 2, let me refresh your memory with what you've missed.

First off, The Goldbergs is not a show about the '80s, so don't think about it like that. It's set in 1980s-something, yes, but it uses the '80s as a backdrop, not as a supporting character. It's more like The Wonder Years than That '70s Show. Also, it's complete with an unreliable Adult Adam Goldberg narrator (Patton Oswalt) explaining Li'l Adam and the rest of the family to us. And while the narrator is unreliable, and he's no Ted Mosby, either. Rather than pick a year and stick with it, The Goldbergs takes everything from the '80s and sticks it in one big pot to stir things up. The show really plays out like a good childhood memory, one that you think you can remember everything about, but it doesn't matter either way. The story will still work even if you mix up the actual release date of Back To The Future.

Who's part of the Goldberg family? There's Adam's helicopter coupon-crazed mom, Beverly; his laid back underwear wearing dad, Murray. He's got an older sister, Erica, who is sassy and popular and sticks out for her younger brother when necessary. Then there's his older brother, Barry, who takes his middle child status o the next level with hilarious one-liners, like how "being awesome makes [him] hungry." Put that on a t-shirt right now. Rounding out the family, there's womanizing grandpa Albert. Come on, it's the '80s.

The show is actually based on the real Adam Goldberg's upbringing in Pennsylvania during the 1980s. So what kind of '80s nostalgia did you miss in Season 1? Some highlights:

It's like football, but it's not. It's Ball Ball, and it's what the Goldbergs created on Thanksgiving. It's like New Girl's True American, but not as drunk. Its rules are made up on the spot, and for the first time Adam manages to beat Barry at it, which doesn't sit well with the older brother. Here's to hoping this ridiculous indoor game is brought back season after season.

We've most certainly seen these parents on TV before, but maybe never so loud. Yes, they're yelling because they love you, and because they only want the best for you. We can all relate to that. We can all relate to a mom like Beverly who demands that a store take her expired coupon. We totally get how Murray sometimes takes a back seat to life, but he's there whenever you need him. And we can totally understand why it's sometimes necessary to withhold a little bit of truth from Beverly, just so she doesn't freak out. The show is about Little Adam and his adventures in the '80s, but the true heart of the family really lies with the parents. Also, big hair.

Barry's the best. Whether he's stealing quarters from his grandfather to play the new video game at the arcade, or joining the wrestling team but only attempting to do WWF moves on his opponents, or explaining that Flava Fav is the only one that gets him, he is the most misunderstood Goldberg child. Thankfully, he never comes off as a jerk older brother, but rather one truly trying to figure out what life is even about. Also, he goes as The Hulk for Halloween. So that's pretty awesome.

Yes, there is an entire episode centered around renting movies from a video store, something so archaic and outdated you might as well group it with some dinosaurs. Murray forgot to return Slap Shot, even though he insists that he did. All Adam wants to do is rent Temple of Doom. Even after finding the missing VHS tucked in his arm chair, Murray refuses to admit that he was wrong, and gets himself banned from the video store. However, he does strike up an agreement with the store clerk, and gets Adam his own membership card so he can rent movies himself.

And finally, The Goldbergs gifted us with an entire episode built around The Goonies. It actually involves Erica and Barry getting fed up with how much Adam loves The Goonies, and they decide to leave a fake treasure map in the attic for him to find and follow. It's all a hoax, and it kind of devastates Adam, but when Albert enlists him to actually find something misplaced — some of Beverly's jewelry — he uses this as the opportunity to really live out his Goonies fantasy.