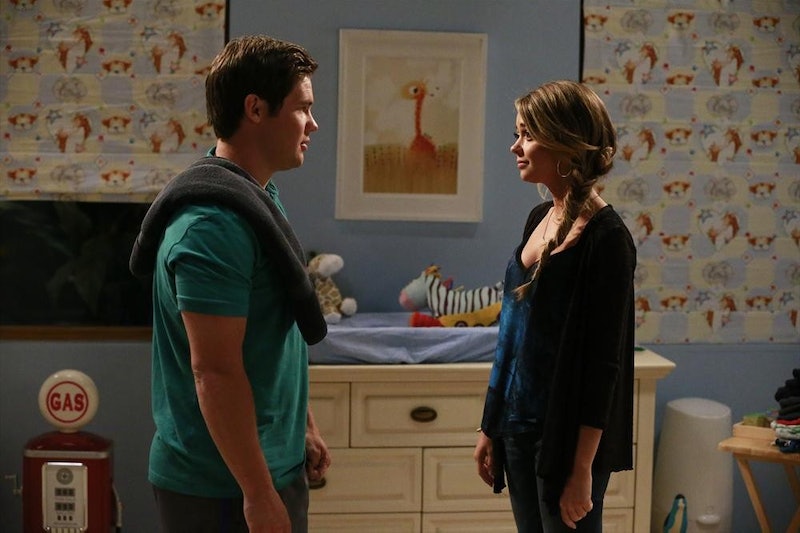 On Wednesday night at 9 p.m., ABC's Modern Family returns for Season 6 and I, like most fans, can't wait to start laughing. The Dunphy/Pritchetts deliver some of the funniest familial laughs on network television. If you don't believe me, just ask one of their many Emmys. (The whole cast gets to Beyoncé hair flip on that one.) I don't know about you, but I wish Phil Dunphy was my husband and Lily was my daughter and Mitchell and Cam were my brother and brother-in-law. You know what I also wish? That my voodoo dolls would work already and Andy and Haley would finally get together, and get it on. (That got weird. Sorry.) But for real, guys.

Last season, Haley and Andy (played by Workaholics' Adam DeVine), were left Sam and Diane-ing their feelings for one another. (That is a Cheers reference for all the young'ns out there.) Haley really deserves to date a decent guy after her last few relationships ended up being deeply lackluster. Andy seems the perfect guy for the job. He's caring, he's Haley's foil, and he loves almost too hard. His character is a young Phil Dunphy in training, minus the cheer gear. Do you 'ship it? I certainly do. To all the Mod Fam fans out there who are desperate for some Haley/Andy time, you just might get your wish. Andy has some serious screen time in the upcoming season, according to the Wall Street Journal. Wait a second? Are those my dreams coming true? That sounds 3D-movie real.

While it's not confirmed specifically that Andy's presence in the Dunphy/Pritchett world is for Haley's sake, I'm pretty sure it means things are going to get romantic up in here. Season 5 ended with Haley telling Andy to cut ties with his then girlfriend, Beth, because he deserves better.

The sitcom translation for that video is "We're pretty much a couple now. You don't know it yet but we're going to go monogram towels together." So to me it just seems like a matter of time until Haley and Andy become Aley or Handy. (Sorry, these couple names are not my forte.)

That being said, I really do hope they get together. Haley's at the age where she doesn't need any more immature guys to hang on to. She needs someone serious, with a serious relationship to match. As much as I loved Dylan's songs about "doing it in the moonlight," I feel like she can do better. The same goes for Andy. It was painful to watch such an adorable, deserving guy like him get treated horribly by some girl none of us have even met. (Oh! Can we please have a showdown between Beth and Haley? Please? Just putting that out there.)

Here's hoping the newly grown-up Haley finally gets the grown-up relationship she deserves.