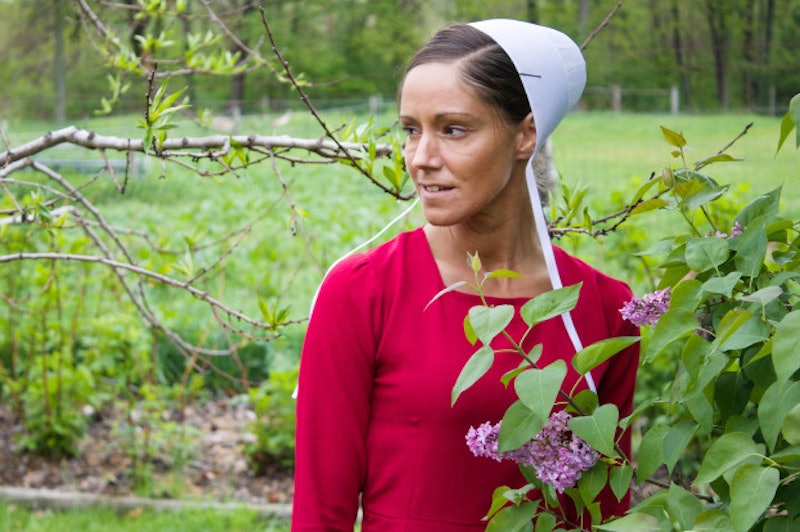 TLC has been hinting for weeks at the "big secret" that new star Vonda Schrock of Breaking Amish is hiding. "I have a really big secret, that I keep from everyone," she teases, tying up her horse and walking to a mysterious house (as mysterious as a house with a white picket fence can get?), as TLC's version of "Amish-esque" music plays in the background. "There's so many rules with the church, and it's kind of hard to follow them," we hear, as she asks the man who opens the door if she can have "just 15 minutes" and giggles conspiratorially. "There's one thing I like to do for myself, that no one has to know about" (except you, millions of Americans watching. I'm so glad you decided not to change the channel after Say Yes to the Dress).

The Amish-eqsue music climaxes as her long red dress and white bonnet fall to the floor. And suddenly... cue TLC's stock salsa music! "My big secret is, I like to go tanning," Vonda confesses as she's engulfed in blue UV-ray light. "Amish do keep me in business," says Al, the go-to Amish tan man. "If it wasn't for them, I wouldn't have any bread or butter on my table."

Bustle writer Laura Rosenfeld took one look at Vonda's bronzed skin and predicted the reality star's big secret last week. The real scandal here seems to be that anyone still uses tanning beds. "The main reason I like to go tanning is, it's relaxing," Vonda admits, as I frantically search for an old copy of Allure to teach her the dangers of tanning.

Is tanning-gate indicative of how interesting Season 3 of Breaking Amish is — or isn't — going to be? The plotline is a pretty clear attempt by TLC to paint some sort-of "before" portrait of Vonda and her gang, before we get to see the "after" unfurl in a Bushwick youth hostel.

And it's no secret that many of the cast on past and present seasons of Breaking Amish have colorful pasts. Both Vonda and castmate Miriam Troyer left their community during Rumspringa, an Amish tradition in which 16-year-olds are allowed to explore the outside world and decide if they want to remain in the community. As the NY Daily News reports, both women eventually returned, although Miriam was shunned by her family after she came back pregnant.

Vonda, meanwhile, apparently got into some trouble with the law. Two of her mugshots have been floating around the internet, along with a couple of supposedly "racy" Myspace photos (the Internet's words, not mine).

Does it really matter if the photos were taken during Rumspringa, or if Vonda and co. are really still Amish? Of course not. These same rumors, stories, and "scandals" have been plaguing the show since day one. People clearly must not care if they're still watching. Or really are just too lazy to change the channel after Say Yes to the Dress.