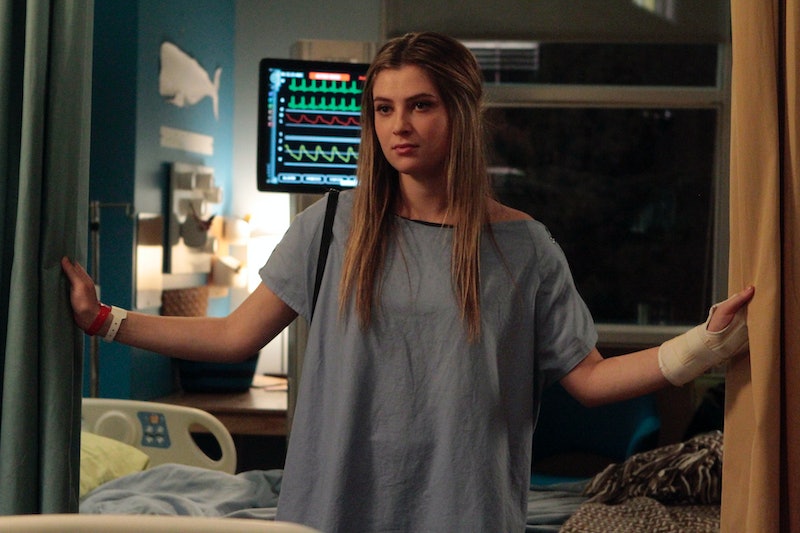 I love medical dramas — especially when they include hot doctors and moody teens. This means that obviously, Red Band Society is right up my alley, and even though we're only two episodes in, I'm obsessed. On this week's episode, we got to know the kids who populate Ocean Park Hospital... and, in the case of the bitchy Kara Souders (played by Zoe Levin), their parents. For Kara, this means her moms Sara and Daniella finally showed up, ready to go to social media war in order to secure her the new heart she needs to survive the defect she's just been diagnosed with.

First of all, it's amazing that Red Band Society made the decision to portray a family with two mothers. This should not be groundbreaking in 2014 by any means, but unfortunately... it kinda is. And as it turns out, these new characters are exactly the kind of people you'd imagine would be responsible for creating someone as cold-hearted and surly as Kara. On the outside, they appear to be put-together, tough-as-nails, cold women, but when you take a better look, you realize they both have good hearts deep down. They sort of remind you of a particular hospital patient, don't they?

And, as in every family, there's more than meets the eye. Of these two women, Sara is Kara's biological mother, while the other Daniella is her former nanny who her mom inadvertently fell in love with. But despite the drama there, the family really came together.

But besides giving us an insight into why Kara is the way she is (and hope that she's not as awful as she appears), Kara's moms have awesome qualities of their own:

They're the perfect example of affluenza — in a good way

Kara's moms are the epitome of rich bitches, but I mean this in the best possible way. They're tuned in to social media, and are ready to go all hashtag on this heart defect. Almost instantly after hearing about their daughter's diagnosis, they've created a tag for her cause (#HeartAndSoul), and are planning large scale event to raise awareness.

They are also blissfully unaware that the transplant list doesn't care how much money you have. Have you guys never seen Grey's Anatomy? UNOS don't play.

They genuinely love their kid

They want to do things their way to get Kara's condition the attention it deserves, but when she admits that she just needs to know they're there for her — without, you know, causing a giant media circus to get the attention they're obviously craving — they're totally down for it.

Although that doesn't mean they take her crap

Kara is the epitome of the snotty cheerleader she wants everyone to think she is, and while many parents would be totally terrified of a kid like that, Kara's moms aren't phased. If she gives them any crap, they give it right back. And I love it.

They take Ellen's word as gospel

Because, let's face it, Ellen DeGeneres' word is gospel. In Kara's bio mom's words, "The woman is syndicated, for God's sake."

Fingers crossed we get more of these loving, motivated moms in upcoming episodes. And maybe a guest spot from Ms. Gospel herself?