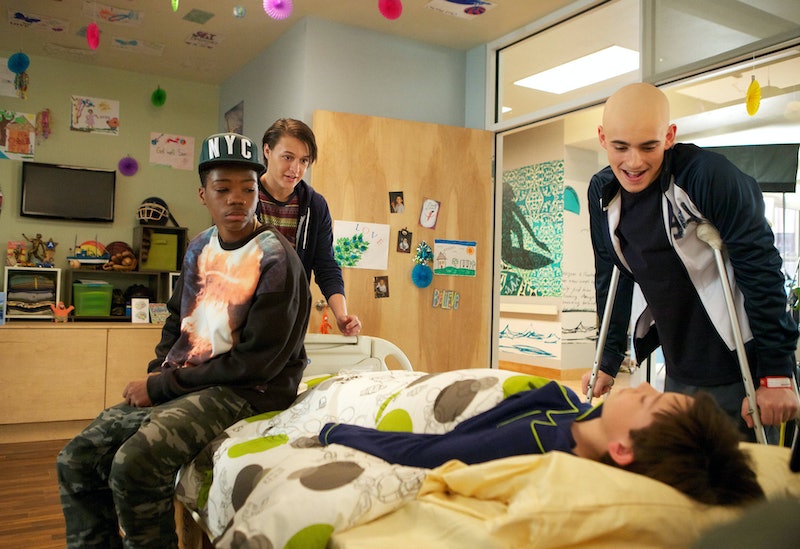 One of Fox's new fall series, Red Band Society , might seem familiar at first glance. It centers on a group of teenagers who live in the pediatric ward of a hospital and everything they go through as they face their unique challenges, such as cancer, an eating disorder, and many others. If you didn't already know where I was going with this, seeing the words "teenagers" and "cancer" in the same sentence probably tipped you off. Red Band Society immediately calls to mind The Fault In Our Stars, John Green's beloved YA novel that was turned into a hugely successful film this summer. And based on the Wednesday night's series premiere, they do have a few things in common — besides those two words.

There are a few small details found in the TV series that will immediately stick out to TFIOS fans. One of the main characters, Jordi, is revealed to have Osteosarcoma and needs to have his leg amputated to treat it. That's the same type of cancer that the forever swoon-worthy Augustus Waters has in TFIOS, and he also lost a leg during treatment. Jordi's roommate at the hospital, Leo, also had a leg amputated, and he remarks that the memory of having a leg is more painful than being without one, leading to a flashback of him triumphantly scoring a goal during a soccer game. Similarly, prior to the events of TFIOS, Gus was a basketball star at his high school and at different points in the book, most notably before he and Hazel Grace Lancaster have sex, he reveals that he is still self-conscious about not having a leg.

But the two share more than these small details, they actually seem to have very similar themes. Early in Red Band Society's premiere, the narrator (who's in a coma, BTW) says, "everyone has two stories, the one they want you to know and the one they don't.” It's very reminiscent of the first time Hazel and Gus spend time together, when Gus asks Hazel what her story is. As she begins listing her various diagnoses and medical treatments, Gus interrupts her to say, "No, your real story." In both stories, this relates back to a recurring idea, that there's more to someone than their diagnosis.

Yes, Hazel and Gus are both sick, but that doesn't define them, and they see each other for who they are without their illnesses. And even though the titular Red Band Society lives in a hospital, they don't seem to dwell on each other's illnesses. They throw parties, flirt, smoke weed, mess with the hospital staff, laugh, and do just about everything else you'd expect from a group of teenagers.

There's also a sadder similarity that though prevalent in TFIOS, seems like a more subtle undercurrent for Red Band Society — or at least in the premiere. One of TFIOS' most heartbreaking scenes is when Hazel refers to herself as a grenade. She knows that she's going to die sooner rather than later and constantly worries about what her death will do to her parents and, as they get closer, Gus. In Red Band Society, there's a suggestion of this theme that will likely be brought back throughout the season. While the group is in school discussing Henry V, they mention the idea of not getting too close to someone if they're about to die, which leads to some furtive glances between Leo and Emma, with whom he has a romantic past.

It's almost as heartbreaking to see this group coping with their own mortality at such a young age as it was in TFIOS, but John Green's story is more upsetting for one key reason, which happens to be one of the biggest differences between the two: Red Band Society does not have a relationship to compare to Hazel and Gus. Sure, there seems to be a love triangle forming between Leo, Emma, and Jordi, but can that really compare to the love story for the ages that is Hazel and Gus? Let's just say that no matter how long Red Band Society lasts or how great it becomes, I just can't see any of these characters falling in love the way you fall asleep.

But that's not to say Red Band Society isn't worth watching. It has its own strengths, and just as all YA literature shouldn't be compared to TFIOS , neither should all stories about sick teenagers. And since Red Band Society is a weekly TV show, not a book or movie you only technically have to read or watch once, it might be better off. Because while the premiere proved that Red Band Society has the ability to make you cry, I doubt it could ever cause a reaction that comes remotely close to the indescribable feeling TFIOS brings its fans.

And if it did, we probably wouldn't survive. So just give Red Band Society a chance on it's own, okay?