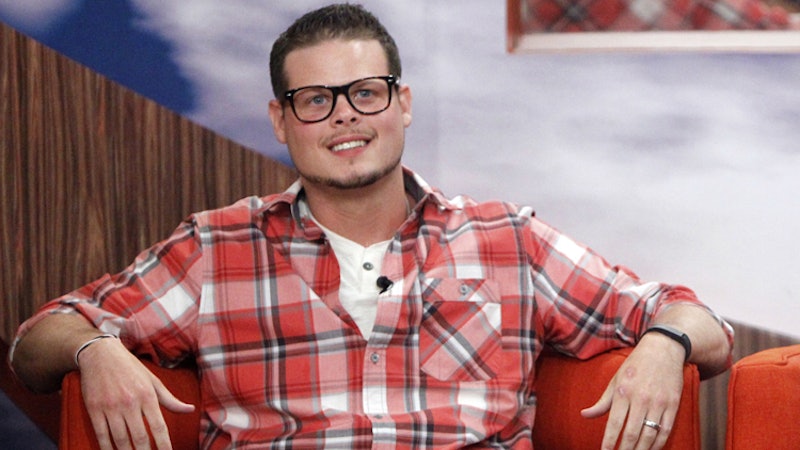 Tuesday was the first day of fall, which means that the "most twisted summer ever" has finally come to an end. By 11 p.m. on Sept. 24, we'll all know which Big Brother houseguest is walking away half a million dollars richer, and I'll have to begin the slow readjustment back to a schedule that doesn't revolve around watching three hours of Big Brother every week. (It's a hard job, but someone had to do it.) Pretty much every fan — myself included — is convinced that Derrick will win this thing, and it would be a huge upset if he didn't. But there's still one big decision he has left to make: should Derrick reveal that he is a police sergeant in his final speech to the jury, or should he keep quiet until after the vote?

For people who aren't familiar with the way finale night works, the final two houseguests (who will probably be Derrick and Cody) each have a chance to try and convince the jury to vote in their favor. It's a similar format to the weekly pre-eviction speeches, but because this is the very last episode, the final two can reveal their whole games and all their strategies and secrets, to prove that they were in fact the best player of the season.

In an interview with the Big Brother Network before going into the house, Derrick stated that, at first, he had planned on letting everyone know he's a cop. But he ultimately decided against it, saying there were too many risks involved.

It's pretty incredible how the Puppet Master was able to outline his strategy three months ago, and then stick with it all the way to the end. He's positioned himself so well and so subtly throughout the game, it's hard to remember how much work it actually took. And that could be a problem for him. Derrick only has a few minutes to convince the jury that he was behind nearly every eviction the entire summer, and that he's been manipulating all of them the whole time.

If I were Derrick, I would definitely tell the jury — IF I were speaking second. The order of the speeches could actually matter in this season's finale because, from the Jury's point of view, Cody and Derrick are fairly evenly matched. As viewers, we've seen Derrick play an amazing game. But without access to all the feeds and diary room footage, they both look to be in similar positions: both were members of the Bomb Squad/Detonators/Hitmen; both played good social games; both have won an equal number of competitions. If Cody goes first and just mentions all of those things, Derrick will be able to say that he did all that, plus he was also the last member of Team America and he used his experience as an undercover cop to manipulate his competitors. Can't really argue with that.

But if Derrick goes first, he won't have the advantage of outshining Cody. If he were to reveal his true profession, Cody could then come in and say that Derrick has been lying to the house the whole time, turning Derrick's great gameplay into a negative. Cody might argue that Derrick was the reason each member of the jury was evicted, so why should they give him the win? (Of course, all this could only happen if Cody was quick enough to get over the shock of finding out Derrick is a cop, and then figured out how to use that to his own advantage, all within a few minutes.)

Derrick's entire game has been about keeping a low profile and letting other people take the heat. So he probably won't make a big move and reveal he's a police officer. But I'd love to see the looks on the jury's faces if he played that card in his final speech. Holla, Derrick!