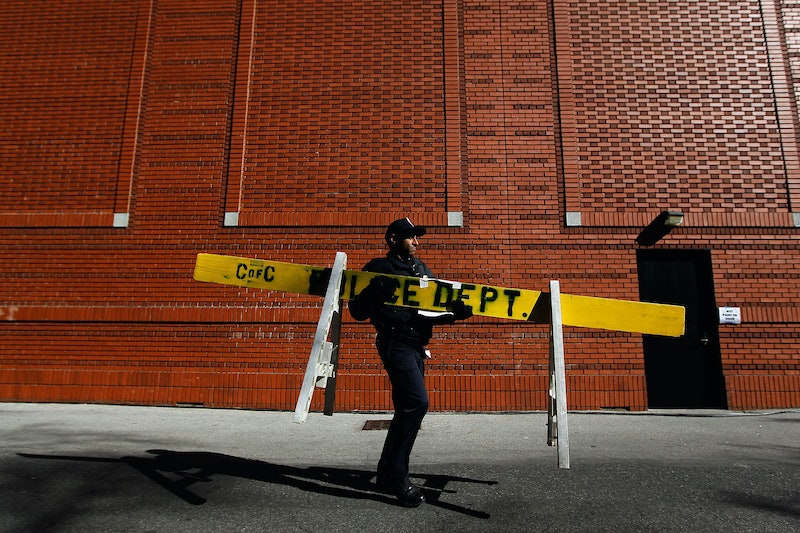 Even as the aftermath of Michael Brown's shooting in Ferguson, Missouri, begins to die down, instances of racially charged — and downright racist — police behavior continue to underline the tragic state of our nation's police forces. Earlier this month, a South Carolina state trooper shot an unarmed black man, Levar Jones, three times, during a routine traffic stop — fortunately, unlike many other such instances of police brutality, the entire incident was caught on a dashcam, and this week, the state trooper was fired.

Here's how it went down: 31-year-old Sean Groubert, a lance corporal, pulled Jones over in Columbia on Sept. 4. The driver had apparently not been wearing his seatbelt. As the video will show, Jones obligingly stops at the gas station and gets out of his car, at which point the officer politely asks him to see his license. Jones reaches back into the vehicle and — the officer flips. Suddenly, he's firing on the unarmed man, who'd just done what he'd been instructed to do.

Later, when Jones asks the officer, "Why was I shot? All I did was reach for my license. I'm coming from work," Groubert tells him: "Well, you dove head-first back into your car. Then you jumped back out, I'm telling you to get out of your car."

This reasoning didn't stick, though: Groubert was fired from the Highway Patrol last week, and on Wednesday, he was charged with assault and battery. Said South Carolina Department of Public Safety Director Leroy Smith, as quoted by the Huffington Post:

After my review of the facts surrounding this matter, I have determined that Mr. Groubert’s actions rose to such an extent that his employment with us must be terminated. While Mr. Groubert was within the law to stop Mr. Jones for a safety belt violation, the force administered in this case was unwarranted, inconsistent with how our troopers are trained, and clearly in violation of Department policies.

Groubert has pleaded not guilty, and is free on bail. His trial is set for the end of next month — if he's found guilty of the crime, he could spend up to 20 years in jail. In the meantime, Jones will be healing from his injuries, and this case will become yet another enraging statistic about the racially charged use of excessive violence in America.