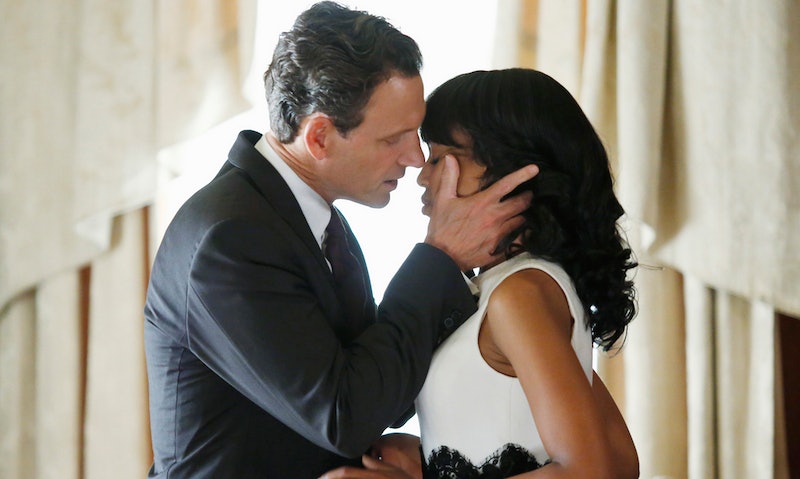 The day has finally come: Scandal Season 4 is finally here, y'all. Suit up in your Olivia Pope-inspired outfit from The Limited and don your white hat, because on Thursday night, we're all gladiators. It's been a long summer without Pope and Associates, and despite the fact that not nearly enough spoilers (at least to my liking, anyway) have been released for the upcoming season, I'm determined to figure out what the Scandal Season 4 premiere will bring. And from the episode's title alone — "State of The Union" — we can already make a few guesses as to what we can expect when Scandal's iconic flashbulbs start going off again.

In Olivia's world, there are a lot of different unions — mostly the kind that even she doesn't have 100 percent figured out. When we last saw her, Olivia was taking her father up on his offer to help her disappear and boarding a private plane with Jake, presumably never to be seen or heard from again. But Olivia Pope has never been able to fully disconnect from her work, and it's a no brainer that eventually, she'll be returning to her old post, deftly fixing other people's mistakes. When she does come back, though, she'll have to deal with the mess she left behind — and, unavoidably, some of those unions are going to suffer.

The State of Olivia's Union With Fitz

This is the big one, right? Poor Olivia and Fitz have never been able to get anything about their relationship right. It's so obvious they're meant to be together, but the obstacles never end. First, the big issue was simply that Fitz was the POTUS and married. No big deal, right? We can overcome that — at least, in Shonda Rhimes' world, we can. Now, though? Fitz's son, Jerry Jr., is dead at the hands of Olivia's father... and Olivia's made a big statement by flying off with Fitz's pal Jake and ignoring all his calls. As much as I love Liv and agree she needed a vacation, it kinda hurts my heart that she wouldn't respond to Fitz when he was clearly suffering with the death of his son. And the repercussions when she returns? They might not be something she can repair.

Imagine this is real life for a sec: You jet off to a tropical island with a very good looking guy who you have some feelings for... and who has a lot of feelings for you. Are you telling me that nothing would happen while you're away? No way. We all know that Olivia and Jake aren't just on that island for a little scuba diving and platonic sand castle building. When they get back to DC, I wouldn't be surprised to find out that they're officially official. And it wouldn't be the worst thing in the world, even though I have major trust issues where Jake is concerned.

And then there's Fitz and Mellie

Now that they're both dealing with the loss of their son — and Fitz's gal on the side has apparently fled the country — I wouldn't be surprised if Fitz and Mellie are suddenly back on again. They need each other right now, and, as Tony Goldwyn revealed in a recent interview, the loss of Jerry might just bring them closer.

Of course, something (or more likely someone named Olivia Pope) will eventually rip them apart again, but there's something about the friendship that's underneath their screwed up marriage that I really love about them.

But all in all, it seems that this name game Scandal is playing with the first episode of the new season is a clever way to take a look at all of our favorite unions — and put one or two of them in quite a terrible state.