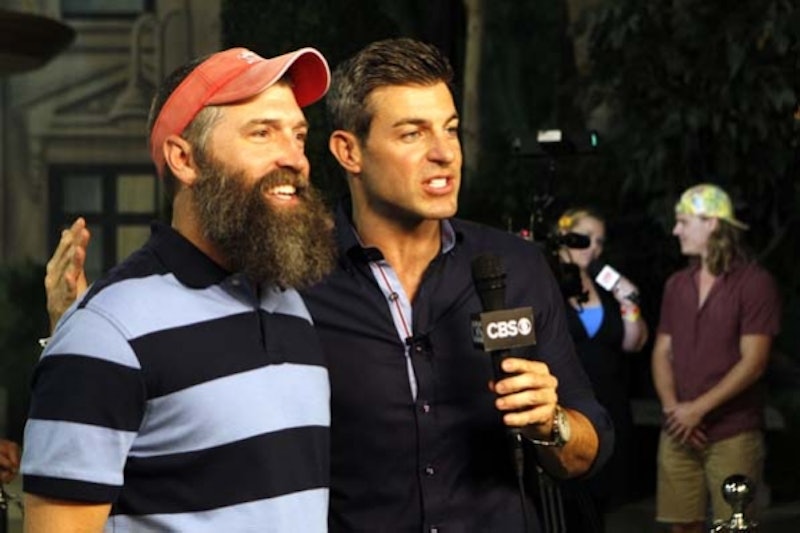 The summer is finally over, everyone. You might be wondering how I've just come to that realization 25 days into September, but everyone knows the summer season hasn't officially ended until the Big Brother Finale has aired. During the live ceremony on Wednesday, Derrick was voted the latest Big Brother winner and Donny was voted America's Favorite Houseguest, two results that a majority of the audience felt both men sincerely deserved. However, even though we watched the CBS broadcast and kept tabs on the live feeds, there was a lingering question leftover from season 16. That question was: when the jury members returned to the house for a luxury competition and trashed it, who scratched out Victoria's name in the bathroom? As it turns out, Donny is the one who scratched out Victoria's name.

This is a shocking twist mainly for the fact that none of us saw this coming. When the house guests saw that Victoria's name had been scratched out, they immediately suspected Zach. Zach and Victoria spent most of the summer at each other's throats, with Zach continuing to make jokes about what a terrible game player Victoria is even after leaving to go to the jury house and with Victoria shredding Zach's precious pink hat and showing it to him during her eviction video. If not Zach, then the house guests thought it might have been Christine, who was just that kind of petty. After all, being the one to be betrayed by her alliance and sent home before Victoria must have hurt.

But no, the house guests — and all we lowly audience members — were totally wrong. It was the beautiful bearded groundskeeper Donny who scratched out Victoria's name, although Donny didn't bother to tell us why he'd done that. All he did was follow up his confession with a huge smile that reminds you of exactly why you fell in love with Donny and that beard in the first place. Will Donny give more interviews explaining why Victoria's name had to be scratched up? Was he trying to give the house guests a clue for who to evict next? Did he just find her voice really grating? What was up with that, Donny? Christine and Zach both had motives, but who saw this coming from America's Favorite Houseguest?

I guess that beard was hiding more secrets than we truly realized.