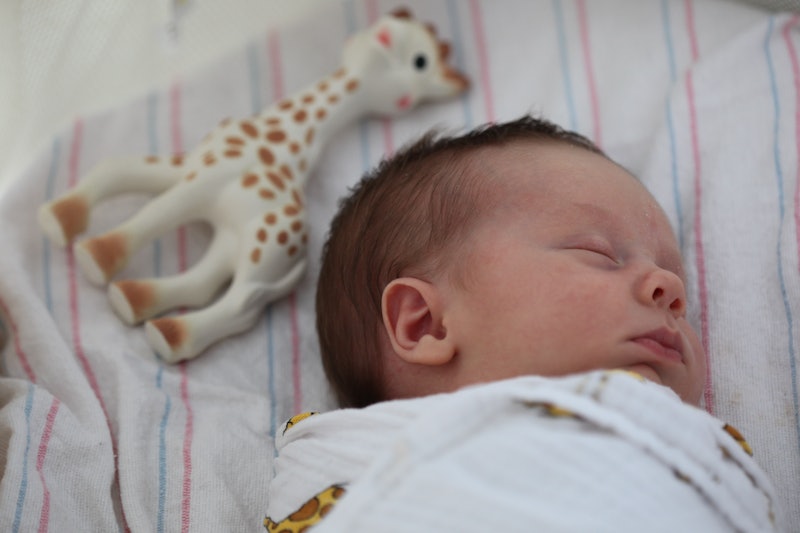 Watching an episode of the ABC reality show Shark Tank doesn't usually inspire the warm and fuzzies. With rapid-fire questioning from the Sharks about the success and potential pitfalls of a new product in the market, it's usually a bloodbath. And just like real sharks in the ocean, when these millionaires smell blood in the water, aka a product that could potentially make them millions, they'll stop at nothing to get what they want. So how will an adorably-named product like Sleeping Baby's Zipadee-Zip fare when it finds itself in the Shark Tank during the Season 6 premiere on Friday, Sept. 26?

If you couldn't tell from its jovial name, the Zipadee-Zip is a product for babies created by the husband-and-wife team of Brett and Stephanie Parker. It's a wearable blanket that helps ease the transition from swaddling, which is a technique parents use to help the child — and themselves — sleep by wrapping the newborn in a blanket to mimic the comfort of the womb. Think the Snuggie but way cuter and less embarrassing.

Can I get one of these in an adult size, please? Hey, a grown woman needs her sleep, too. OK, so the Zipadee-Zip is only available for babies, but here's why the Sharks may still want to get their hands on one of these re-imagined swaddling sheets.

As the saying goes, "Necessity breeds invention," and when the Parkers' daughter Charlotte would suddenly come awake and out of her swaddle after previously sleeping so soundly, the couple knew they had to do something about it. Stephanie took to her sewing machine to create the starfish-shaped onesie that helps the baby feel enclosed, as in the womb, but also gives the child freedom to move around and not be completely swaddle-less.

The purpose of swaddling and of the Zipadee-Zip is to help babies from waking up due to what is known as the Moro reflex, which is an involuntary response when the baby is startled. All babies should do this, and it usually disappears about three to four months after birth.

They're available to buy now

Products that appear on Shark Tank aren't always available for sale when they appear on the show. But luckily, if you're hip to the Zipadee-Zip, you can buy as many of them as you want on the company's official website. There are styles for boys and girls, as well as fleece Zipadee-Zips for colder nights. Prices range from $34.95 to $38.95 per Zippy. But there is a Shark Tank special discount going on right now. Wasn't that nice of them?

The Parkers created pajamas for children when they outgrow their Zipadee-Zips, appropriately titled the Flying Squirrel PJ. Stephanie also told the parenting blog MommiesFirst that adults often ask if they make grown-up versions of the Zippy. The evidence suggests it's only a matter of time before they do.

The only thing better than saying the word "swaddle"...

... is watching this ridiculously cute video of a baby sleeping soundly like a little butterfly in a cocoon. I'm jealous.

I just really want to see Kevin O'Leary, aka Mr. Wonderful, in an adult Zipadee-Zip, OK? Is that too much to ask?