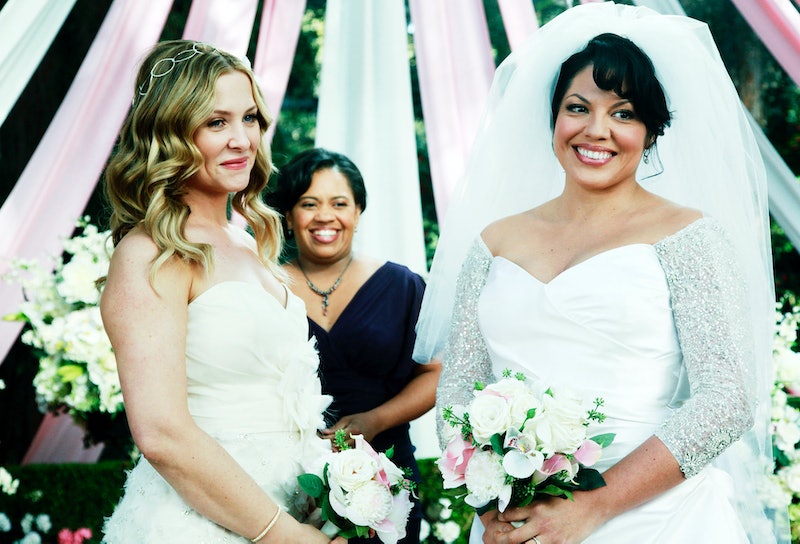 A new season of Grey's Anatomy is here and fans are wondering just how creator Shonda Rhimes will break our hearts this time. It's well-known that nothing is sacred in Shondaland and beloved characters can die at the drop of a hat. Shipping characters is also dangerous because very few of them make it to their happy ending. Although, after a hard fought last few seasons, I thought Callie Torres and Arizona Robbins were finally together for good. But in Rhimes' mind, Calzona's chance of survival as a couple isn't guaranteed. "I’ll be honest with you and say that there is literally a 50/50 chance that they’ll be together or apart, and I have not figured it out yet,” Rhimes told Entertainment Weekly. "That is the other big storyline of the season for us."

Grey's Anatomy fans have lost a lot of couples over the years. Lexie and Mark, Teddy and Henry, Cristina and Burke, Cristina and Owen. It seems wrong to take Callie and Arizona away from us, especially because as of the end of Season 10, they were finally back in a state of happiness. They had decided to have a second child and were starting over in a new house after a rough few years. Everything seemed to be falling into place and now Rhimes is threatening to take that all away.

BECAUSE THINGS ARE FINALLY GOOD

Between Callie almost dying in a car accident, Arizona losing her leg in a horrific plane crash, and Arizona cheating on Callie it has been a rough few seasons for the pair. But Season 10 left on a good note. Though the couple discovered that Callie was no longer able to bear children after the accident, the pair settled on finding a surrogate and were super happy to be having another child together. After reaching that place of happiness, it would be cruel for the writers to drag them back into the unhappiness they had finally overcome.

One of them is basically in danger of dying every season. You can't keep putting them through all that stress to not even get a happy ending.

BECAUSE THEY'VE BEEN PATIENT

Arizona helped Callie rehabilitate after her car accident and Callie took care of Arizona during her recovery from the plane crash. Then Callie dealt with the fallout from Arizona's cheating and Arizona worked hard to get Callie to come back around. They've paid their dues, they deserve happiness together now.

BECAUSE WE CAN'T LOSE TWO COUPLES IN ONE SEASON

All the promos for the show are teasing that Meredith and Derek are going to have some hard times ahead. I'm sorry, but you can't break up two of the show's original beloved couples in the same season. I'm pretty sure that's illegal.

BECAUSE THEY'RE WILLING TO SACRIFICE FOR EACH OTHER

This is not a selfish relationship. When Arizona didn't want to have kids, Callie put that dream on the backburner because being with Arizona meant more to her. Later when they decided to have another child and Callie found out her uterus couldn't handle it, Arizona offered to carry the baby even though she originally didn't want to. True love is prioritizing your partner's dreams and sometimes taking one for the team to keep your union strong.

Arizona is a tough woman, but underneath her bubbly and strong exterior is a lot of self doubt. But with Callie her confidence soars and her fear of abandonment dissipates. Callie makes Arizona a better version of herself.

Callie is a woman of her word. Rhimes can't make her go back on that promise.

BECAUSE THEY HAVE A KID

Come on, Shonda. Let them stay together for the sake of their daughter who already lost her father.

Grey's can be a pretty depressing, grisly show at times. Calzona is the light it needs.

BECAUSE THEY ALREADY DID THE BREAKUP THING

It's lazy writing to have the pair break up again after they already did in Season 10.

BECAUSE OF THIS SCENE

"We are together because I love you and you love me, and none of the rest of it matters." See? Listen to your characters, Shonda. They know they're supposed to be together, and you need to know it too.