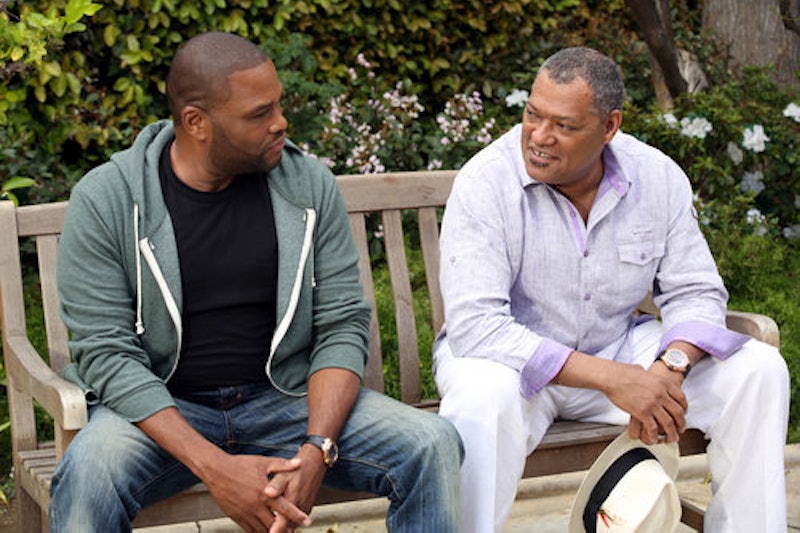 On Wednesday night, ABC debuted a new comedy series called black-ish and it basically changed my life. Of course, it didn't come without controversy. Before the premiere, many people had an important thought question: is black-ish offensive to, well, just about everyone? After the premiere, that question became largely replaced with the thought question: when is the next episode of black-ish coming out? At least, it was for me. However, one question that truly deserves to be given spotlight after the pilot episode of black-ish is what exactly the word "black-ish" even means. The pilot brought up a lot of different issues surrounding the word and the show itself seems poised to continue exploring these issues as the season goes on.

"I may have to be urban at work, but I'm still going to need my family to be black. Not 'black-ish'. Black," says Andre Johnson, played by Anthony Anderson. "From here to forth, we are going to keep it real." As far as Andre is concerned, being "black" means keeping it real and being "black-ish" means not keeping it real, which can be a pretty confusing definition for those who aren't up on their modern slang. So what is the exact definition of "black-ish", as far as the pilot seems to be implying? Let me offer this formal definition:

black-ish. adj. [blak · ish] The phenomenon of being physically or ethnically African, Caribbean, or otherwise Black without living up to the guidelines of that heritage culturally. e.g. joining the field hockey team and wanting to have a bar mitzvah for your birthday party instead of playing basketball and not having a bar mitzvah for your birthday.

From that, it might be assumed that being "black-ish" isn't something that is universally relatable. However, black-ish may be viewing the issue through the lens of the Black American point of view, but the subject of cultural identity is something all Americans struggle with. The United States of America is an entire country with a culture that was blended by the multiple ethnic background of its immigrants. Even Americans who were born here had family, no matter how far back, that migrated from somewhere else. Speaking as a first generation immigrant myself, the struggle of cultural identity and assimilation is one of the first things that I had to struggle with when I first moved to America from Jamaica. Well, that and the language.

My parents were both born in Jamaica. So was I. But when I was five years old, we moved to America, where my younger sister was later born. Like the Johnsons, there often feels like there is a huge cultural boundary between myself and my parents. They speak Patois. I don't. They listen to reggae. I don't. They want to retire in Jamaica. I don't even want to go there during our biannual family trips. The number of times I had to explain to my mother that America doesn't have "first form", we have "seventh grade", is unreal. If any of this sounds familiar, it's because it's the life story of every first generation American whose family was born in another country.

black-ish asks the question that every immigrant — myself included — ends up asking themselves at some point in their lives. How do I fit into the American landscape and still preserve my cultural heritage? Is it possible to do one without losing the other? In that sense, the phrase “black-ish” describes not only a person who is “physically but not culturally black”; it’s a phrase that describes any person who is descended from a cultural background that they don’t necessarily actively practice. The fact that I can't speak any Patois like I could when I was five is still a source of deep shame to my father, whose English and grammar I take great joy in correcting as my own form of playful retaliation.

Of course, being that black-ish is a comedy, the concept of being "culturally black" is taken too far. Andre becomes upset that his son plays field hockey instead of basketball, upset that his youngest children "don't see color", and upset that his wife, whom he views through a colorist lens, enables and encourages this behavior. At the same time, he gets upset when his white co-worker starts rapping his name as a goodbye, upset when his son's friend assumes they have grape soda in the house, and upset that he's put in charge of his company's Urban Division just because he is black.

The seeming hypocrisy inherent in the character of Andre — fighting some African American stereotypes while expecting his family to live up to others — is so important in illustrating the definition of the word "black-ish". To be perfectly honest, there is no one right way to be "true" to your cultural heritage. Andre learns that just because his children are assimilating doesn't necessarily mean they're turning their back on their heritage and that's a lesson that's so true to the lives of Americans today. I've learned that I'm still Jamaican American even if I hate reggae. You're still Greek American even if the most Greek food you eat is Greek yogurt. You're still Mexican American even if you can't speak a word of Spanish.

We have the rest of the season for black-ish to explore the theme of cultural identity in detail, but the pilot did a great job of introducing us to the struggle that parents of all cultural backgrounds go through with their children as well as the struggle that I have gone through as a first generation immigrant. Considering we come from a country so rich with people from all different kind of backgrounds, it's amazing to have a show like black-ish reminding us to keep a balance between our pasts, our present, and our futures.

After all, becoming "Americanized" can be done without losing everything that makes you unique and without completely disregarding the culture that made us who we are. It's all about finding that "black-ish" balance. I like to think I finally have, but black-ish reminded me that I should remain open to continuing to learn more.