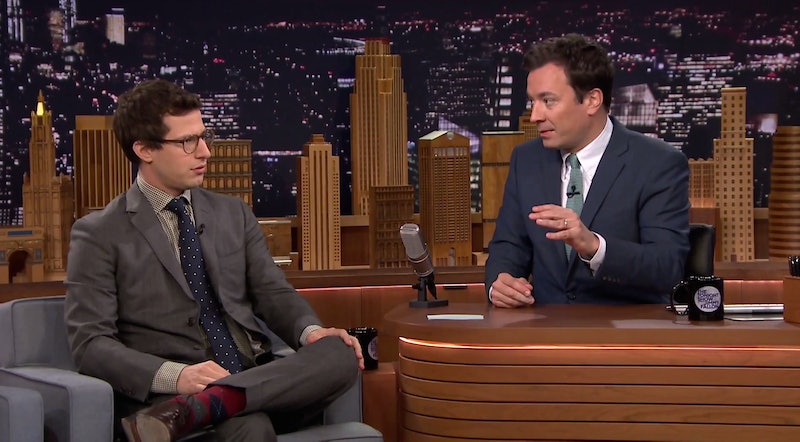 Last night, The Tonight Show Starring Jimmy Fallon was at its absolute best, and that's saying something pretty special because The Tonight Show is usually an enjoyable watch even when it's subpar. This was, mostly, due to the fact that the genuinely hilarious Andy Samberg was on as a Tonight Show guest to promote the new season of the one Fox series everyone should be watching, Brooklyn Nine Nine. Samberg and Fallon, of course, are two comedians who have similar senses of humor and have worked together in the past, so the stage was set for some epic back-and-forth between the two of them — and they delivered, of course, thanks to their general awesomeness.

During Samberg's appearance on the show, Fallon had him play the game "5-second summaries," which is a movie trivia game that's made a few appearances on the series before — notably, with James Franco, who is terrible at remembering movie titles despite being in a ton of them. Samberg is much, much better than Franco at this game, and manages to get a good chunk of the titles.

Even better is the totally awesome banter between Samberg and Fallon, though — it's enough to make me wish they'd actually been on Saturday Night Live at the same time so they could have hosted Weekend Update together, or something. That would have been unimaginably epic.

Check the video below.