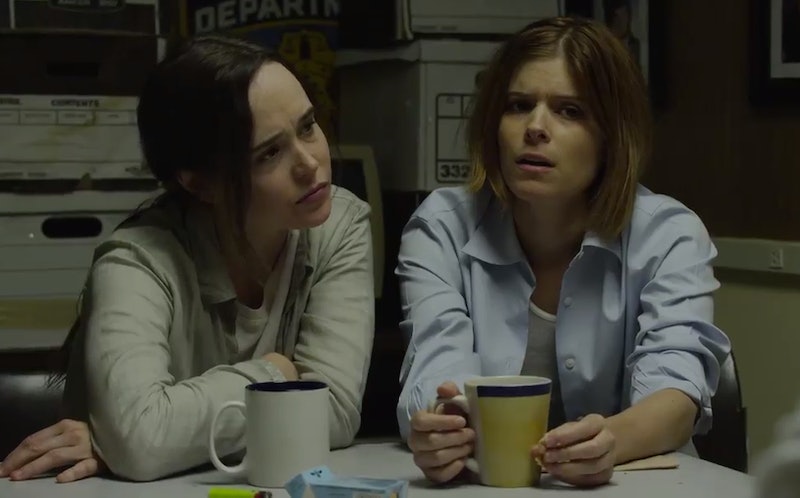 The clip follows Mara and Page as the titular detectives, but their investigation into their various cases are hampered by the fact that Mara is 5'2" and Page is 5'1". From being unable to see a blood splatter on the wall above a high shelf to having to stand on each other's shoulders and wear a trench coat in order to go undercover for a drugs bust, it's no wonder that their superior points out that they've closed absolutely zero cases. Page's legs are too short to reach the pedals when she's driving and Mara and Page both sleep in a shoebox, apparently, but, hey, that's personal.

Even though Mara and Page were clearly just having fun, I'd like to be the first to request the starting of a formal petition to get the two of them to star in a Tiny Detectives web series. In the first place, the two of them have great chemistry as partners and friends and their comedic timing throughout the spoof was impeccable. In the second place, I need to see more of Page on my screen always. In the third place, think of what a great compliment it would be to each dramatic episode of True Detective if a Tiny Detectives bonus parody was available on the HBO website. Honestly, how has no one thought of this already?

Of course, this idea depends on whether or not Page and Mara have the time or room in their careers to film a Tiny Detectives web series. However, considering the two have such a mutual passion for True Detective that they took the time to do this Funny or Die spoof six months after they first expressed interest in being on the show, I don't doubt that they'd make the room if HBO asked them to. Meanwhile, he casting for True Detective Season 2 still remains open and the word on the street is that there's at least one major role for a female that's current looking to lock in an actress.

But in the world of Tiny Detectives, we already have two female leads doing all the detective work themselves. Sorry True Detective, but Tiny Detectives is already a better show than yours for that key fact alone. Watch Mara and Page solve crimes — or not, as the case may be — below.