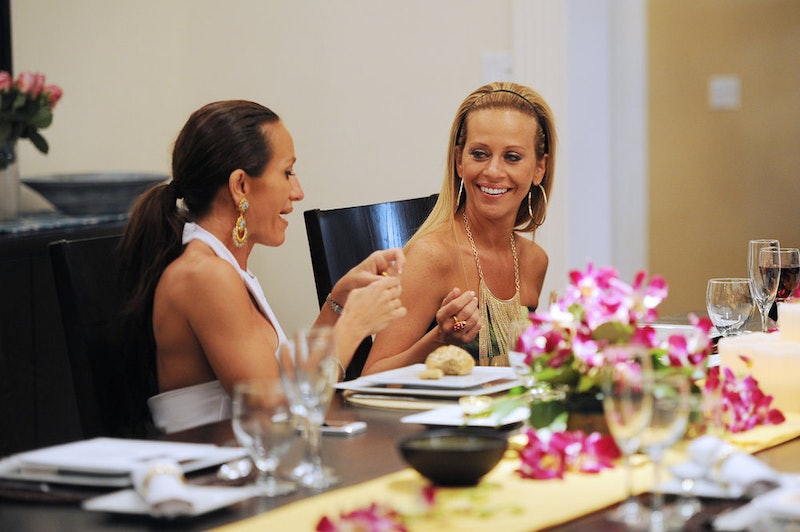 In its relatively short run, this season of The Real Housewives of New Jersey has seen so many rumors and secret, gossipy stories. But one particular rumor, about Teresa Aprea's husband having an affair with her mother, was shocking enough that it almost drove a wedge between fast friends Dina Manzo and twins Nicole and Teresa. But after a tense trip to Florida, turns out Dina, Nicole, and Teresa are still getting along. And that's no small feat — other RHONJ like Jacqueline Laurita and Teresa Giudice, have never been able to repair their friendships.

After last week, it seemed like Teresa didn't appreciate that Dina brought up the rumor, especially while the cameras were rolling, and her reaction seemed extremely tense and somewhat like she knew — or had a guess — what story was being talked about. And she immediately shut it down, telling her own sister to shut up and not to ask about it, even though Nicole thought it was better to get everything out in the open. But Teresa took to her blog to explain away her reaction, claiming that she's actually pleased with how Dina dealt with things, in a contrast to what she said on Sunday's episode. She opens the blog with a big "Kudos to Dina!" going on to say:

I also called Dina and thanked her for making sense of complete nonsense. Three key points she made: First, as soon as she heard the rumor from Teresa Giudice, she said, “I don’t believe that at all.” Second, “It didn’t happen.” And third, Dina’s comment in her interview was that she was more offended that someone would talk about someone’s mother. Thank you, Dina.

So I guess all of the rumors online that the twins yell at Dina and make her cry in a closet, like Radar Online reported, turned out to be false. Nicole also voiced her support for Dina in her blog, saying that she was always sure Dina had her back, and never doubted it: "I never thought for a second she ever wanted to hurt us, but only help us," she wrote.

Dina had a blunter way of dispensing with the rumors — via Twitter. She went off on a website for tagging her along with a story about her trying to make up with the twins.

Everyone seems to agree: Dina and the twins are still tight as can be. In this season full of BFF breakups and estranged family members, it's nice to finally see a blossoming friendship.