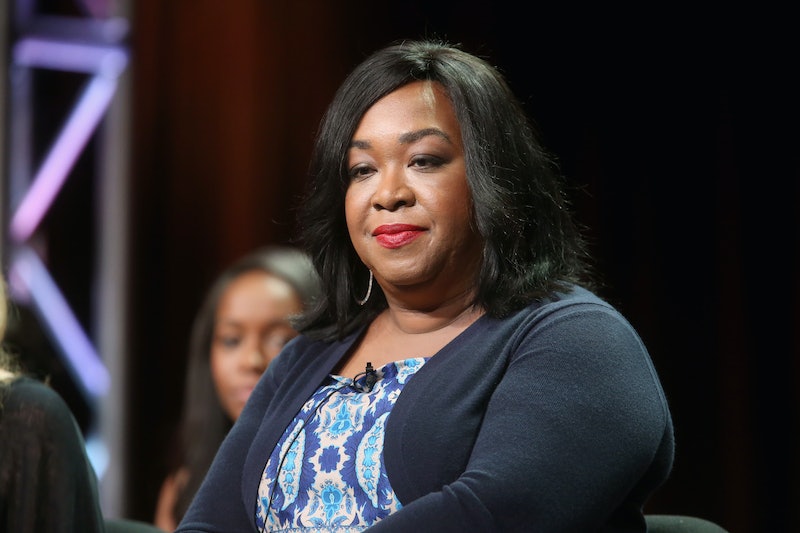 So anyone who followed the controversy surrounding Scandal actor Columbus Short knew that his character Harrison Wright would be gone in Scandal Season 4. Which, considering how season three ended, probably meant he would be killed off, something that was probably for the best considering the abuse charges levied against Scandal's Short by his wife. But if the Scandal Season 4 premiere demonstrates anything, it's that Shonda Rhimes has set a new bar for how to handle an actor who is an alleged abuser.

Rhimes not only made good on her announcement that Harrison would be written off the show — they even found Harrison's body, so he is definitely dead — but she's done a pretty decent job of honoring the character of Harrison Wright who, in spite of being played by a pretty awful-seeming person, was a great character for the show. I, like most gladiators, loved watching Harrison smooth talk his way in and out of trouble. He was the one character who always supported Olivia, the one who was always there to inspire his co-workers, and to do whatever it took for the clients. Although firing Columbus Short was absolutely the right decision, Harrison Wright will be sorely missed.

And Shonda Rhimes has done a pretty good job of honoring the character. It's Harrison's death that brings Olivia out of her island paradise and back to the snake pit of DC, because it's clear that he meant that much to her. She even arranges the funeral. It's also clear that Harrison's death is weighing heavily on the other gladiators, prompting Quinn to track Olivia down and send her the news. Abby especially seems to be taking it hard, prompting her in typical Abby fashion to lash out at Olivia over his death. Towards the end of the episode, the gladiators gather at Harrison's funeral to say goodbye, in a brief but touching scene that shows how much he meant to all of them.

But it's clear that Harrison's legacy will continue on, even wihout Columbus Short. Harrison's death on Eli Pope's orders, is the key to discovering Eli Pope's responsibility in Jerry Grant's death, something that hopefully will be addressed sooner rather than later in the season, given that Olivia is already asking her father questions about it.

In other words, Shonda Rhimes has handled the entire situation excellently. Killing Harrison off — not firing him or having him quit — sends a strong message about not standing behind alleged domestic abusers, while still paying tribute to the character he brought to life, and using the death to naturally fuel a key story line. Audiences who loved Harrison will hopefully be satisfied, while fans who also love the show for its strong female characters and sensitive portrayal of women's issues can also rest assured that Short is off the show.

Take note, other show runners. Shonda Rhimes has just taught you all how to handle an actor who does terrible things. You don't have an excuse not to get this right anymore.