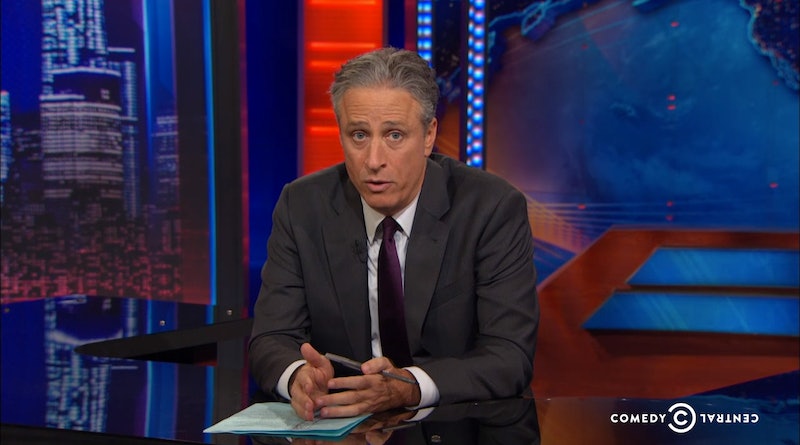 Because this is the year 2014, a football team with a name like the Washington Redskins has been coming under fire for their "traditional" name and under pressure to change it to something less horrifically offensive. Because Jon Stewart is Jon Stewart, The Daily Show did a segment on the NFL Redskins controversy. However, The Daily Show immediately came under fire as well after the segment had been shot because the participants in the segment felt ambushed, attacked, and wary about how the segment would portray them on television. In fact, the participants claimed The Daily Show forced a confrontation between Redskins fans and Native Americans, but both sides told a different story about what happened. Now that the segment has been aired, the question becomes: was The Daily Show in the wrong here?

Stewart opened the piece by discussing the backlash and stating that if The Daily Show found that anyone being interviewed had been led or manipulated into saying certain things or coming across a certain way for the purpose of a segment, then that segment would never be aired. Apparently, the NFL Redskins controversy piece didn't fall under that heading because he promptly showed it. And the thing is? It wasn't. The piece was exactly like every Daily Show piece about controversial news that had come before it, involving the same amount of interviews, sarcastic voice-overs, and equal attention to both sides even though it was clear The Daily Show agreed with one side over the other. In fact, extra effort was placed into being sensitive both to the controversy and to the backlash.

Despite — or perhaps because of — the backlash from the participants, the piece didn't actually show the confrontation between the Native Americans and the interviewees. Oh, sure, the interviewees were shown stating that they would say everything they had said straight to their critics if one were present and sure they all looked slightly taken aback when the Native American protestors entered the room, but the ensuing conversation was replaced with a voice-over of the participants' complaints about the incident and a general summary of what had happened. It even quoted directly from the Washington Post article, including one hilarious complaint that a participant "wouldn't have worn [their] Redskins jacket" had they known the confrontation would be happening.

So while the real source of the issue was said to be that the participants in the segment were uncomfortable with what the Native American protestors said about them during the dialogue, they don't need to worry about defamed by those criticisms. In true Daily Show style, the piece did a great job of illustrating exactly why the arguments used to defend the continued use of the incredibly offensive Redskins name are flimsy and easily defeated when exposed to the history of racism packed into that single title. And in true Daily Show style, it did a wonderful job of giving both sides the chance to air their points, whether those points made sense to us, or Daily Show reporter Jason Jones, or not.

Check out the segment below.